Streaming audio ad revenues will rocket up 17.1% in 2020, growing faster than all other digital ad formats, according to a new local advertising forecast from Borrell Associates. Local digital audio will accelerate faster than even the much-vaunted streaming video/OTT channel, which is on track to rise 12.7%.

The new numbers are from “Budgeting Guidance: Local Ad Forecasts For 2020,” a new report from the media research and consulting firm.

Overall, Borrell analysts forecast local advertising revenue to grow 1.3% to $129.7 billion in 2020. “That is fairly small,” CEO Gordon Borrell said Wednesday during a webinar. And in the latest signal that total digital advertising is decelerating, the Borrell number crunchers see a digital ad slowdown ahead. In fact after an estimated 9.2% increase in ad revenue this year, digital is forecast to grow by just 4.9% in 2020. “Online, after about 22 years of being an advertising medium, is going to decrease in its growth rate down to single-digits this year,” Borrell said.

Next year will be both up and down for radio, depending on whether you look at over-the-air or digital ad sales. Local revenues for over the air are forecast to decline 4.4% in 2020. “We thought it would be bolstered and there seems to be some comeback to radio advertising. But it really appears to be mostly at the national level and not quite at the local level, where there is a lot more noise, a lot more competition particularly from social media, and alternative listening as well,” Borrell said. But there’s an entirely different radio narrative for digital. Radio’s digital dollars will jump 27% to $1.2 billion in 2020 for the biggest percentage increase among all traditional media. 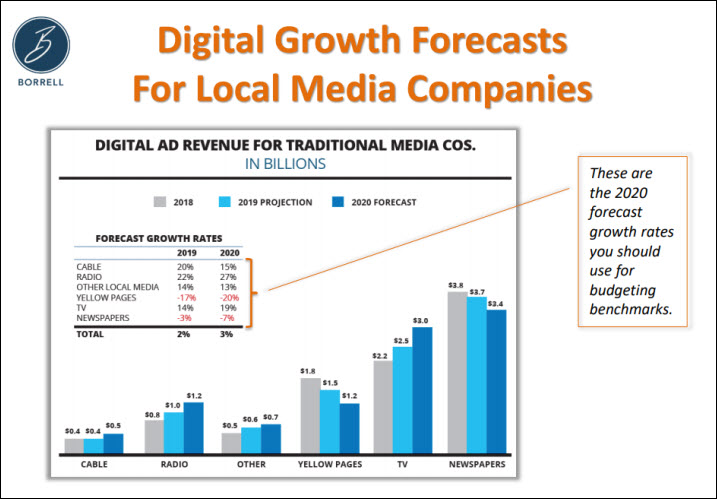 “Radio has discovered this thing called the internet and they’ve just jumped on board pretty quickly and have really remarkably driven revenue in the past year,” Borrell said. “We have seen some pretty big investments by some radio companies in digital.”

After plummeting 13.5% in 2019, local TV revenues are poised to turn around in 2020, due entirely to election year spending, which will trigger a 6.2% increase. “The 2019 loss is due mainly to political and next year all of the increase is due to political,” Borrell said. His firm is predicting 2020 campaign ad spending to total $10.2 billion as candidate spending on digital advertising will double compared to four years ago. Borrell said during the webinar that digital will roughly match what political ad buyers spend on television for the first time. “That’s to TV’s determinant although a lot is going into television – about $2.9 billion in 2020 – and that’s bolstering those TV numbers,” he said. Borrell also pointed out political masks a shrinking base of core advertising revenue. “There is a secular decline in local TV advertising. That’s not news to very many people in TV,” he said.

In terms of dollars, the biggest 2020 increases are projected to come in the amount of money that advertisers are spending on digital services, like mobile and social media management and search engine optimization. For stations offering more than just advertising, Borrell said it presents a growing opportunity. “This is where the money is,” he said. And in one of the most telling indicators of how local businesses are thinking in 2019, advertisers are mixing things up when it comes to getting their messages to consumers. Nearly half (44%) said they are trying something new. Digital ad types occupy eight of the top 10 new media channels respondents expect to purchase in 2019. And many of these are ad types that digitally savvy radio companies are offering as part of their ad packages, including banner, pop-up or display ads on websites (6% of respondents expect to start buying these), mobile SMS/text ads (6%), digital audio, including podcasts and streaming radio (6%) and digital streaming video advertising (6%).

Here Are 7 Marketing Strategies For An Anxiety-Inducing Business Climate.

How To Keep Current Clients On The Air And Approach New Ad Categories.

With No Games To Bet On, Sports-Gambling Shows Pivot To Broader Focus.