Cali native Elaina Smith has been working in radio since her college days at San Diego State University. She worked for “Entertainment Tonight” and “The Insider” before landing with Cumulus Media’s WAOA Melbourne, FL, as morning show co-host.

She was then drafted by Cumulus’ Mike McVay for the country “NASH Nights Live” syndicated show, which airs live from Nashville, 7pm-midnight, with co-host Shawn Parr. 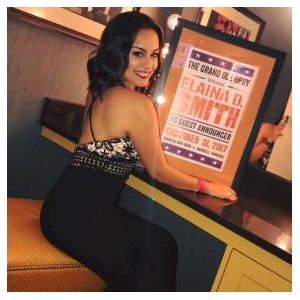 When/how did you get the "radio bug"?

I was working at “Entertainment Tonight” while in college and needed extra money and a flexible second job. I heard that was possible in radio promotions, and got a gig at (Tegna’s) KFMB-FM in San Diego. Despite being a Jack-FM station, they ended up getting the “Dave, Shelly and Chainsaw Show,” but needed someone to fill in for Shelly Dunn until her contract was up at the other station. On a whim, they asked me to audition, just for fun… and it changed my life. I never wanted to do anything else again. They hired me two days later.

What stations/personalities influenced you in the “early days”?

“AJ’s Playhouse” in San Diego, Rick Dees, then Ryan Seacrest in Los Angeles. I listened to Rick and Ryan in my early days living in L.A.—in elementary and middle/high school—and when I moved to San Diego, I found AJ and Geena the Latina. I would listen every morning, and remember wishing I could do something like that, but it seemed so foreign. Turns out, they were training me without me even knowing!

You did TV as well as radio when you were getting started in California, yes?

That was the “Entertainment Tonight” job. I was an intern, then a PA… all behind the scenes stuff. I worked so hard to get that job, and then realized it wasn’t a fit for me. I didn’t like the person I would need to become in order to live that life. At this point though, I have grown enough and am confident enough in who I am as a person, that I would love to go back to TV, simultaneously with radio.

When did you start your current gig? How'd you get it?

We launched “NASH Nights Live” on Jan. 6, 2014. Once I graduated from college, I knew if I wanted to do radio, I needed to spread my wings and do my own thing. I applied everywhere and ended up getting a call from Cumulus about a morning show at a heritage station in Florida, WAOA. They had an opening for a morning show co-host and that’s where I joined the company for “The Timmy & Elaina Show.”

And then about 10 months in, I got a call from Mike McVay (executive VP, Content & Programming, Cumulus Media and Westwood One), whom I had met at a conference, and he said they had been listening and would love to consider me for this “NASH Brand” they were launching. I flew out to Nashville, and a couple weeks later I got the offer for “NASH Nights Live.”

What’s show prep for you?

Living life. I try to translate realness to the radio, because that’s what I like to hear. Also, fully immersing myself into the Nashville scene; we really try to bring Music City to the country. Of course, there is also a lot of research involved, too, as we do interviews almost daily.

Superstitions? Any “must do” rituals before work?

I’m not really superstitious, but I am a creature of habit. I definitely have my routine… Gym, walk my dog Zoey, catch up on what’s going on in the world.

How do you manage your time between the show, social media, podcasting, appearances and personal life?

Ha! I don’t know… compartmentalize, I guess? I always focus on one thing at a time. I’m big into to-do lists. I write down what I need to do each day in my little notebook, and highlight it when I’m done. I try to shut off for the most part when I’m not working, and focus on my personal relationships. That’s what keeps me in check. Tell us about "Women Want to Hear Women."

This podcast is a passion project of mine. I really love to champion other women, and I feel we are too often pitted against each other. The name is derived from a phrase I have heard too many times, only to find out female artists were hearing it, too: “Women DON’T want to hear women.” I just really wanted to reclaim that narrative because I love listening to other women, they inspire me, and I love hearing similar perspectives to mine.

There is a drastic lack of women in the country genre right now, and we’re just opening up that conversation and hoping to be a part of the change. We love male artists as well; this isn’t about bashing guys or anything, it’s just about having more female representation and giving them a chance and a platform. Each week I feature a female artist and we have in-depth conversations about their experience in the industry. We’ve been lucky enough to have Carrie Underwood, Dolly Parton, Kacey Musgraves, Maren Morris, Carly Pearce and so many more.

I have been working with Bridges for the Deaf and Hard of Hearing. I truly love what they do. Also, Nashville Humane Association and of course a huge shout out to St. Jude.

Where did you go on your last vacation?

A cruise to the Bahamas.

Favorite song… ever… and why.

“Amber” by 311. It was mine and my late brother’s song. I could listen to it non-stop and never get bored.

What are your top three places to hear live music in Nashville?

Do you have any

advice for up and coming talent?

Be super present on social media, create a YouTube Channel, go to conferences. Network like crazy and ask to pick people’s brains. That’s a great way to create relationships, get advice and be at the front of other’s minds. We all want to help those coming up, but we’re not going to seek you out. And just be a good person. More often than not, I see people get hired for that over talent. Oh… and send thank you cards, not just emails.

How about a bunch of random stuff? I have the cutest dog in the world, her name is Zoey Barklett Smith (yes, I love the West Wing). If anyone ever wants to go to Disney World, hit me up. I was Dwight Schrute for Halloween this year. I’m 4’11 and you should totally Google a picture of me next to Blake Shelton… you won’t be disappointed. I love to sing on the side (You can YouTube that if you dare). I used to be a competitive dancer and once fell onstage in front of Cher. My mom is my best friend.