As 2019 draws to a close, new data illuminates which formats gained steam this year and which lost ground. Across the total persons 6+ audience, AC and classic hits are on a consistent multi-year upswing while country and pop CHR are drifting in the opposite direction. News/talk remains the most popular format on the radio—a designation it’s held for nearly a decade.

For its “Tops of 2019: Audio” look-back, Nielsen trended AQH shares for the top radio formats across the past three years, based on January-November total week averages in PPM markets. At the broad 6+ level, news/talk remains the most popular format on the radio—a designation it’s held for nearly a decade. News/talk posted a 9.5 share in 2019, down from 10.0 in 2018 and 9.9 in 2017. “With the U.S. presidential election coming up next year, the appeal of news/talk will likely remain strong in 2020,” Nielsen suggests in an analysis of the new numbers. 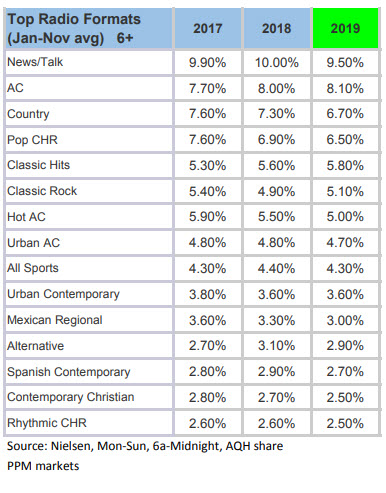 The latest numbers show ratings share continuing to tilt toward older skewing formats. AC, classic hits and classic rock all gained 6+ share while younger-targeted formats such as pop CHR, urban contemporary and rhythmic CHR show declines over the three-year span. This may be driven by the fact that younger people listen for less time to radio while TSL has held up much better among those aged 35+.

Still, across all demos, radio commands nearly 12 hours (11 hours, 51 minutes) of Americans’ weekly media diets— almost four hours more than a typical work day. The number is exceptionally strong when you compare AM/FM radio with the video streaming market, which lately hogs most all of the headlines when it comes to media. “As the streaming wars heat up, it’s important to be mindful of just how much time consumers are spending with different media options,” Nielsen says in the Tops Of 2019: Audio report. According to its data, adults 18+ in the U.S. spend just shy of six hours (5 hours, 51 minutes) with their TV-connected devices each week. “While that’s nothing to thumb your nose at, it’s dwarfed by the amount of time Americans spend with traditional radio, the proverbial patriarch of the media industry.”