In less than a week one of the most radio-focused chairs of the Federal Communications Commission will depart. Ajit Pai’s current term runs through June 30, but he has announced he will follow longstanding tradition and leave the chairmanship when the new administration comes into office on Inauguration Day. “I think the future of radio is brighter than a lot of people think,” said Pai. “It is still such a local medium that covers everything from the Friday night football games to the Sunday church services and city council meetings. Especially during the pandemic, one of the things that I have come to appreciate even more – and I’m sure many millions of Americans share this sentiment – is that local content matters. You want to find out what is going on in your community, especially when you are stuck at home for days or weeks.”

During Pai’s time leading the Commission, more than two dozen media regulations were either eliminated or updated. But Pai’s biggest legacy for radio is likely to be the renewed focus on the AM dial and pushing the FCC to help the industry embrace new ideas and technologies to revive the now 100-year-old medium.

That effort has led the Media Bureau to authorize more than 2,800 AM stations to build cross-service FM translators. More than 1,750 have been constructed so far.

Pai said an example of how they have helped comes from his hometown radio station – Parsons Media Group’s sports KLKC Parsons, KS (1540) – which was able to get an FM translator for the AM that has 250-watts day and just one-watt at night. “That has made a big difference for the folks in and around Parsons to be able to enjoy that programming. That’s a story I have heard from a number of different broadcasters across the country,” said Pai.

Pai also said the FCC’s decision giving AMs the option to broadcast digital-only signals will also help. “The world is going digital, and to give AM broadcasters a chance to experiment and innovate and deliver value to their listeners on a digital platform – that’s something that is going to be really important.”

By one tally Pai has visited all 50 states during his time at the FCC, and many of those trips included stops at local radio stations.

“Radio broadcasters do a great job,” said Pai. “It’s been a tremendous joy to visit them on their turf from KZPA in Fort Yukon, AK to WAGG in Birmingham, AL and I want to thank the radio broadcasters for giving me such great advice and counsel over the years and also literally opening up their stations to show me what they do best – which is to inform, entertain, and bind together the American people.”

‘Time To Turn The Reins Over’ 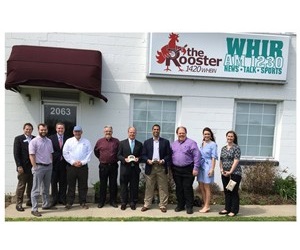 For nearly nine years, Pai has filled a seat at the Commission. To mark his final meeting, Pai on Wednesday wore the same suit he did during the FCC’s May 2012 meeting. “It’s a little tighter now than it was then, but nonetheless it does the trick,” he joked. Pai spent the final minutes of the meeting with a long list of thank you’s to the agency’s career staff that he worked with and recalled a story he has shared often with broadcasters through the years – that his parents immigrated to the U.S. in 1971 with eight dollars in their pocket, a transistor radio, and the American dream.

Pai, 48, joined the FCC in 2007 as a staff attorney in the Office of General Counsel. Then in 2012, he was appointed by President Obama to fill one of the Republican-controlled seats. When President Trump was sworn-in in 2017, he turned to the Commission’s senior GOP commissioner to take over running the agency.

Had Trump won a second term, Pai had already decided that he would exit in early 2021. “I thought the time was right to turn the reins over to some of the other talented public servants at the Commission,” he said.

Pai has not announced his plans for the future. There has been Beltway buzz about the difficulties members of the Trump administration will face when seeking new jobs in Washington. Pai declined to say whether he thought his time at the FCC would prove to be a negative for his career path. Pai has been a supporter of President Trump but he called his refusal to acknowledge the election outcome and the suggestion it could be changed a “terrible mistake.”

Pai said he did not have any specific advice for his yet-to-be-named successor but said the biggest potential pitfall will continue to be simply getting things done. “The next FCC will face some of the same challenges that the current FCC has in terms of keeping the momentum going,” he said. “The independence of this agency is something that I am very proud of, and I think it will stand the agency in good stead long after I am gone,” he said.