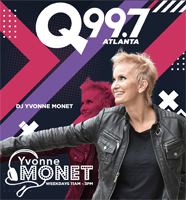 Some in the market may remember Monet from her 1992-2003 stretch at the station when it was “99X” WNNX and she jocked for then PD Brian Philips. She hosted the weekend dance show “The Beat Factory,” a sex advice show “The Pleasuredome” and other specialty programs for the station. She later worked on air for CBS Radio’s “Dave FM” WZGC (2005-2012) and for Clear Channel’s “102.1” KDGE Dallas (Oct. 2003- Jan. 2004). In 1985 she formed Yvonne Monet Events, making a name for herself as a club and event DJ in the area. Monet has also done voiceover work, including voicing Don Henley’s music special on A & E.

to give Monet more leeway than a typical midday jock gets when it comes to what she plays. “The idea is to do a lot of content in middays,” Diaz said, “a lot of music stuff. We can do mix shows. We can do a TikTok mix or an old-school mix. We can do mixes of songs from the 20 years of Q99.7.”

“Atlanta’s sophisticated audience has always demanded and embraced programming innovation. All at Cumulus are proud of, and confident in, these fun, adventuresome changes at Q997,” Philips, now Executive VP, Content & Audience at Cumulus, said in a news release.

Jones has also DJ-ed the annual Girls Night Out Event staged by “The Bert Show.”

“Top 40 is an ever-evolving project and the addition of market legend Yvonne Monet to Middays and Atlanta’s Vibe with Jade and Moe in Afternoon Drive adds connection, community and distinctiveness to the Q99.7 brand,” said VP/Market Manager Sean Shannon.

Both dayparts were open since early January when midday host Rachel Ryan and afternoon personality Adam Bomb vacated the station. Ryan had been with WWWQ since 2016. Bomb, whose legal name is Adam Baum, had been there since 2006. He continues his Westwood One-syndicated night show.

The Q99.7 night slot is now open and Diaz is looking for a replacement.

Cumulus management tells the AJC the strategy at Q99.7 is to counter the growth of Spotify and Pandora and all the streaming services by providing listeners something different: more personality throughout the day, in contrast to the more music-oriented approach at its on-air competitors in the market.

Diaz said Monet will bring “a fresh feel” to middays with “great on-air and video content on our socials.” The new afternoon show “will be a spin-off of ‘The Bert Show,’ he added, with “heavy listener inclusion with a lot of video and presence on our station site and socials.”