The new numbers are from BIA/Kelsey’s Outlook For Local Advertising report, set to be released next week.

“Even with increased audio competition from many different sources, radio is still a formidable advertising platform, gathering over 10% of local adverting dollars,” BIA/Kelsey senior VP and chief economist, Mark Fratrik, said this week during a webinar presented by the Media Financial Management Association.

Looking ahead to 2018, radio’s combined over-the-air and digital assets are expected to cordon off 10.2% of the $155.6 billion that marketers will spend on local advertising, or $15.87 billion. The lion’s share will go to over-the-air radio, which is forecast to capture 9.2% of local ad dollars with another 1% coming from radio’s digital assets. “There will be some benefit from political advertising for radio in 2018 but not huge,” BIA CEO Tom Buono said.

And there are dramatic differences in growth rates from local market to market. For example, Boise will grow at a compound annual growth rate (CAGR) of 1.6% from $25.2 million in over-the-air revenue in 2017 to $26.9 million in 2021. But Pittsburgh will inch up only by a CAGR of 0.4% from $85 million to $86.3 million over the same period.

“There are wide variances from market to market but typically radio gets 10% to 15% of local advertising,” Buono said. 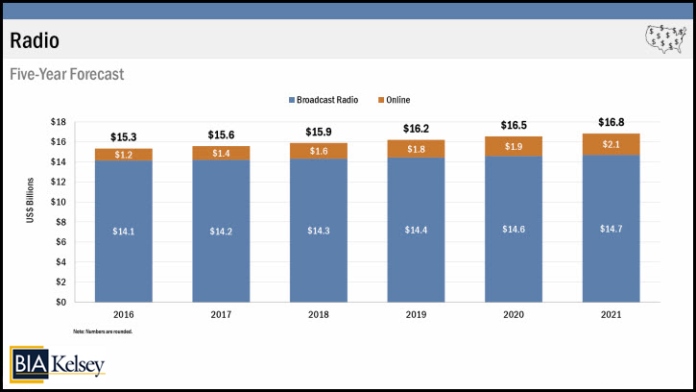 “Radio will remain a prominent player; we’ve got it fifth out of the top media platforms,” Buono said.

The new BIA numbers show radio’s share of local ad spend also varies from category to category. For instance, radio is forecast to over-perform in nationwide finance and insurance spending. Over-the-air will siphon off 13.1% of local media dollars in this key vertical while radio’s online properties will grab another 1.5%. That amounts to more than $2.5 billion spent on radio from the likes of GEICO, State Farm and local banks and other financial institutions. Only direct mail (28.8%) and mobile (19.9%) will attract a larger share of finance/insurance spending. “Radio gets a good share of that, more than 14.5%,” Fratrik said. “Radio is a really strong player in this vertical.”