Instead of just selling against other radio stations, radio can exploit a larger market opportunity and potentially tap into a steeper revenue growth curve by selling successfully against the Google-Facebook digital advertising duopoly in 2021. So says BIA Advisory Services managing director Rick Ducey in a recent blog post that advances what he calls “the 2x equation.”

The theory turns on the firm’s recent forecast showing radio as No. 5 among the top five media for local ad spending, trailing mobile (smartphones, tablets) and online (desktops, laptops), which claim the No. 2 and No. 3 positions, respectively. When local ad spending across these three media channels is combined, radio averages 25.9% of that spending in the top 5 markets compared to Google’s 53.6% average share of this spending. That boils down to Google capturing double the amount of radio’s share. “That means that every percent point of spending radio sellers can win away from Google is like getting a 2 percent share increase of radio spending in the market,” Ducey says. Hence the 2x equation. 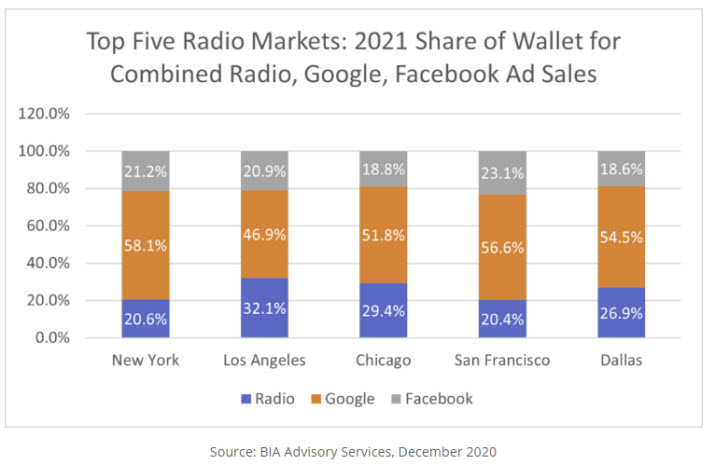 The data shows that some markets are stronger radio markets than others. At 32.1%, Los Angeles radio wins the greatest percentage of combined Radio+Google+Facebook sales and San Francisco the lowest at 20.4%. Converting Google dollars to radio dollars means higher margin sales, Ducey points out, while winning similar amounts from Facebook spending “just sweetens the pie for radio and increases the multiplier effect.”

Radio sales strategies that focus on pulling ad dollars away from Google and Facebook, instead of the station down the dial or the competing cluster, “dramatically upsize radio’s total addressable market” since the pool of digital dollars in local markets dwarves those allocated for radio. “Going to a client and converting even one percent of their Google spending into more radio spending by showing how they can actually increase [return on ad spend] and digital KPIs that way is a huge win for radio,” Ducey contends. There is a growing body of research supporting how radio and digital work together, he notes, including “Radio Drives Search,” an RAB study that found advertising on radio drives a 29% incremental lift in brand online search results.

While it’s wise to continue to sell digital inventory, from both station owned and operated assets and third-party white labeled and branded digital inventory, Ducey makes the important point that selling air-time “has undeniable benefits” to radio operators. After all, on-air advertising has higher margins than digital inventory and adds more value to enterprise valuations. “Driving more of a sale to radio is a win,” he concludes. “Driving more spending overall to radio for both its broadcast and digital assets whether third-party or owned just adds to the total upside opportunity for radio in 2021.”