There’s never been a more important time to focus on what an audience actually wants versus what a station is hard-wired to think they want. That is according to a new study by Futuri in conjunction with researcher SmithGeiger. It finds one year into the pandemic, radio has a developed a gap between the growing demand for more content and the number of people working in the industry to meet that need.

“The audience wants more content but media has fewer and fewer people creating that content,” said Futuri CEO Daniel Anstandig during a webinar on Tuesday.

The survey found three out of ten people report listening to more local AM/FM radio between the first and second quarters of this year. In fact the report says it is difficult to find a single activity that did not see an uptick in activity this year, especially anything online, which is opening new opportunities for providers.

At the same time, SmithGeiger asked media executives how the pandemic has impacted their business. It found one of every two radio executives said their company has experienced layoffs or reduced head count. A third (32%) has furloughed staff. And nearly four in ten (37%) said they have cancelled or postponed hiring. Researchers found that air talent, producers, and program directors were most impacted by those moves at a time when the audience is tearing through content at a voracious pace.

“Content leaders are struggling with downsizing at a time when quantity and quality of content has never been more important,” said Anstandig. “Consumers are voraciously consuming content and at the same time we have reduced the number of people in our industry who create content – so we’re in a bit of a paradox.”

Futuri says it has seen the shelf life of content continue to shorten. Its Topic Pulse uses artificial intelligence to scour social networks and news sites to determine what the hot topics are online. Anstandig said they now see topics remain viral for roughly four to six hours. “That means in a world of fewer content creators, and a world of voice tracking and recorded content, we have to be super-efficient about the types of topics that we identify and place on our broadcast, digital and social channels,” he said.

Facing a challenge of how to cope with smaller staffing levels, Futuri found that the top way creators are finding new ideas and talent is by scouring social media networks. It was far more relied on that developing a local community to feed into a media outlet’s talent pool. There’s also a greater reliance on sister stations.

It is staffing hurdle of a different sort – retirement – that may also be having an impact on radio’s embrace of new business models and new ideas. The average age of media executives surveyed was 55 years old and nearly half (45%) said they plan to retire with the next decade. That included eight percent who expect to retire within the next three years. The data suggests not only a historic changing of the guard on the horizon for radio, but also a short-term impact on priorities.

“People who are intending in the short term to retire have a much larger mindset around keeping what we have,” said Anstandig. The top priority among those planning to spend another 11 years or more working is developing new business, cited by eight in ten. And 70% said increasing digital revenue was a big priority, while it did not show up in the top three for those closer to retiring.

“There’s a more bullish perspective on investing in social and digital platforms, attracting younger audiences, and frankly, taking risks,” Anstandig said. “There’s a balance for us to address as an industry – balance around keeping what we know around institutional knowledge and the best practices we’ve developed over 100+ years of radio, but also being able to attract younger talent that just find it natural to operate in an omni-channel universe.” 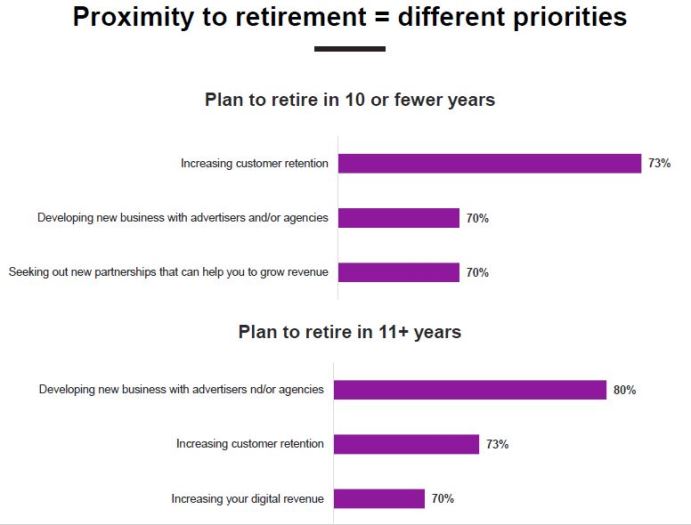 In a wide-ranging study, Futuri found the definition of radio has become all-encompassing to include streaming services, podcasting, and satellite radio. The reason most said they listen to local AM/FM radio, however, was to find what they cannot hear on the other services. “There was a reason that they listened to local and that was unsurprisingly local content that was the biggest motivator,” said Anstandig.

The data is based on data collected from 2,029 online interviews with 16 to 74 year olds in the U.S. and interviews with 158 radio, television and digital publishing executives. Download a copy of Futuri’s Future of Audience and Revenue Study HERE.