Digital audio is capturing more of Americans’ time each day, according to new data released by eMarketer. It reports nearly an hour and a half of time was spent with streaming audio and podcasts last year, forecasting people will add another five minutes to their digital audio diet this year. Analysts expect one hour and 34 minutes to go to podcasts and streaming audio this year, a 4.8% increase compared to 2020.

The outlook includes a mea culpa from eMarketer. “Early in the pandemic, digital audio took a huge hit in user engagement and in the amount of time listeners were spending with the medium. Many observers, including us, predicted dire results in the short term. However, the rest of the year played out very differently than those early weeks,” it said in a blog post. The result was rather than the earlier forecast of a one percent decline in time spent with digital audio, U.S. adults instead increased their time spent with the medium by 8.3% last year. “The lesson of last year is that digital audio is far more resilient and adaptable than we thought,” eMarketer said.

The growth curve for digital audio is slowing as activities like podcasting become more mainstream with more than 100 million Americans already reporting they listen to podcasts. But analysts point out that it is “only marginally” slowing. As the impact of the pandemic changes in the coming months and years, new habits could also form. The eMarketer update notes that with people working and schooling from home, rather than listening to podcasts during their commute, there has been a rise in weekend podcast consumption. 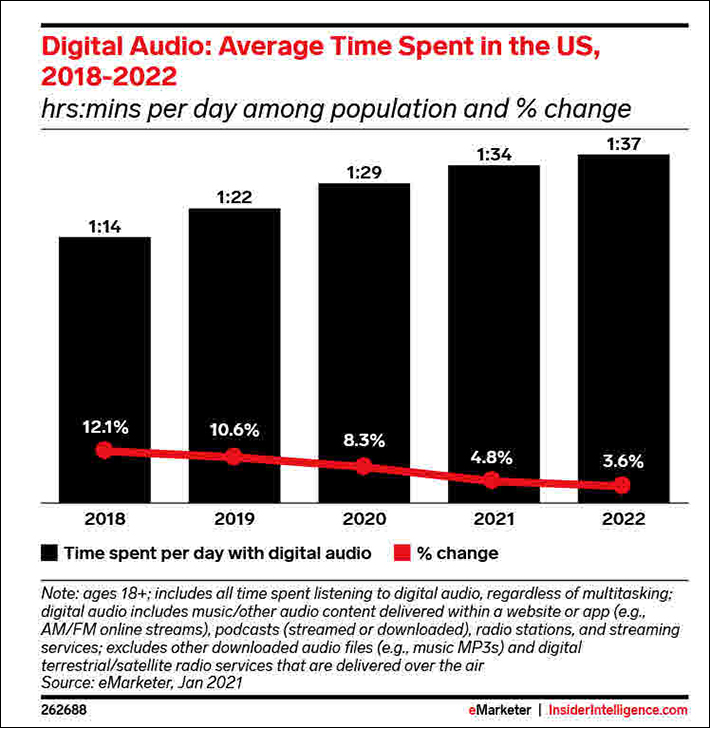 Digital audio accounted for 11% of total media time per day for U.S. adults in 2020 and eMarketer forecasts that will rise to 11.7% or one hour and 34 minutes per day in 2021. “More than 70% of US adults listened to digital audio content at least once a month last year, and 91.7% of this occurred via mobile,” it said.

The firm also predicts that in 2021 a “major milestone” will occur between digital audio and traditional AM/FM radio. It says that for the first time more time will be directed toward digital audio than traditional radio, albeit ever so slightly. It estimates 50.8% of U.S. adults’ total audio time will go to digital this year.

iHeart’s Conal Byrne Casting Wide Net For How 3D Audio Will Be Used.

Edison: 30% Of All Audio Listening Now Occurs On Mobile Devices.

eMarketer Sees Podcast Ad Growth Of 41% In 2021 As Its Digital Audio Share Expands.