Federal Communications Commission chief Ajit Pai, on a visit to South Florida Monday, urged wireless companies to activate FM capability in all smartphones. Pai traveled to see first-hand how broadcasters and other communications services were recovering from Hurricane Irma.

“The FM chip is a valuable functionality, not just when times are good or when it helps you save battery life or reduces congestion on the wireless network, but especially when there’s an emergency,” Pai told WPBT-TV. “People want to tune in to the radio broadcast and get emergency information and this can be a valuable way of doing that.” Pai has long been a supporter of the technology but he’s said that the FCC doesn’t have the legal authority to require cellphone companies to wake up FM features. He’s hoped by using such high-profile statements that he can encourage carriers to voluntarily do so.

It’s the second boost for FM in smartphones in the wake of Hurricane Irma. The South Florida Sun Sentinel newspaper last week published an editorial calling on cellphone companies to activate FM chips and calling out Apple CEO Tim Cook for resisting the technology. “Do the right thing, Mr. Cook. Flip the switch. Lives depend on it,” the editorial said, adding, “Our app and streaming addictions won’t disappear if we have the option of listening to FM radio. That’s why our earbuds are plugged into an iPhone, not a Walkman.”

NextRadio developer Emmis reports that listener counts and session starts soared by 1,127% in Ft. Myers-Naples during Hurricane Irma. There were sizable gains in Miami, Tampa and Jacksonville as well after Emmis worked with the Florida Association of Broadcasters to promote the feature. 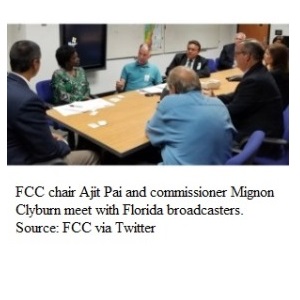 There remain 26 radio stations out of service in Florida, including 22 full-power stations and four translators. The number ticked slightly higher last weekend as the FCC received its first reports from some stations to its voluntary Disaster Information Reporting System (DIRS). There is also one station off the air on the U.S. Virgin Islands: news/talk WTJX-FM (93.1) on St. Thomas. It is the final daily report that the FCC will issue. The agency has deactivated DIRS at the request of the Federal Emergency Management Agency. That means stations will no longer need to file status updates with the FCC. The agency says it expects that in the next couple of days, FEMA will likely request it issue a new DIRS activation for Hurricane Maria in Puerto Rico and the U.S. Virgin Islands.

While initially a loss of electricity led some stations to go dark, for many of the stations that are now offline, the issues are more severe. For instance, Azure Media just reported that the tower used for WJBW West Palm Beach (1000) was taken down by Hurricane Irma. It offered no timeline for when it will be able to get the station targeting the local Haitian community back on its feet.

For many broadcasters there’s more than just fixing facilities. They are also helping employees recover. Salem Media Group is offering to make a dollar-for-dollar match for each contribution to a fund set up to assist staff members impacted by Hurricanes Harvey and Irma. Salem says it will donate up to $25,000 to help the cause.