Calling radio “the last bastion of legacy media strength,” advertising and media industry researcher and consultancy The Myers Report is forecasting total audio ad spending will grow at an annual rate of 3.7% between 2020 and 2025. The projection, released Tuesday, factors in the impact of COVID-19 on ad spending. According to the report, total audio advertising will grow from $18.7 billion in 2019 to $23.2 billion in 2025 for a 23.9% increase over the span of six years. 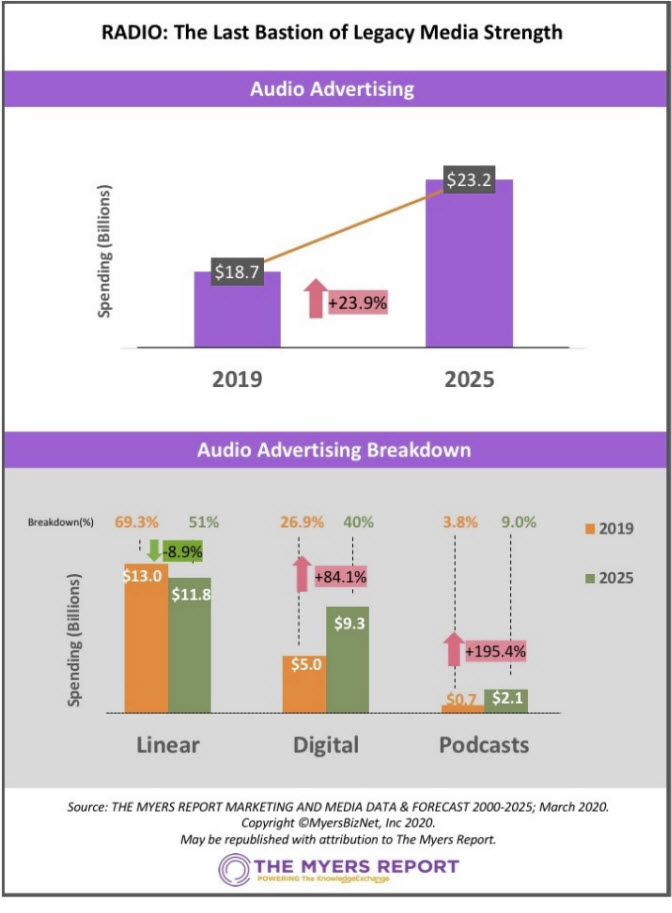 “To those of us who have always been believers in radio, as those in the industry know I've been, it's not a shock that radio is emerging as the only legacy (i.e., pre-digital) medium that's emerging as a growth medium,” Jack Myers, a media ecologist and founder of MediaVillage, says in a blog post. “It's difficult to overestimate how important an economic threshold radio has achieved.”

As with most recent radio forecasts, the impetus behind the upward trajectory is digital growth. While other legacy media generate 15 to 25 cents in digital ad revenue for every linear or legacy ad dollar they lose, Myers forecasts the local radio business will generate around $1.30 in digital revenue for every linear dollar lost. That’s expected to more than make up for what he estimates will be an 8.9% decline in linear radio revenues, from $13.0 billion in 2019 to $11.8 billion in 2025.

“Compared to network television and print-based media, linear radio is demonstrating remarkable resilience,” Myers says. “Led by podcasting investments, an emphasis on localism and brand personality, renewed advertiser interest in audio as a communications platform, plus nimble response to technology threats, the radio industry is overcoming two decades of negative trade reporting, financial challenges, and technological threats and is emerging as a rare economic winner in the advertising landscape.”

Elsewhere on the traditional media landscape, local broadcast TV advertising will decline 9.6% from 2019 to 2025 and cable TV will decrease 3.5%.

In fact, The Myers Report is forecasting all linear/legacy ad spending will decline an average 6.7% annually with annual total digital ad spend increasing +4.8% for the period 2020-2025.

Myers says he arrives at his projections by combining econometric modeling with public company reports, investment analysts and industry sources, along with primary in-market studies, conversations and overall marketplace trends.