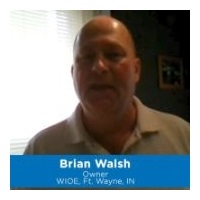 As the Federal Communications Commission weighs whether to allow AM stations to voluntarily switch to all-digital broadcasting, a test run in Fort Wayne, IN offers a cautionary tale that the move from analog isn’t right for all operators. Owner Brian Walsh switched oldies WIOE (1450) to a digital-only signal in late May but he quickly moved back to an analog broadcast. Walsh reinstated the analog AM stereo broadcast in early-June from 6am to 6pm after he heard complaints from listeners who were no longer able to receive the station and believed WIOE was experiencing technical problems rather than taking a step into a digital future. That is despite the fact that WIOE has an FM sister – WIOE-FM (101.1). While AM digital remained in overnights, Walsh threw in the towel last month when he returned to analog 24-hours a day.

“I underestimated how many listeners were on that AM radio station,” said Walsh. “We couldn’t quite make that bridge with all the emails and phone calls that were received from listeners and I felt it was hurting the overall product of the station.” He told the Radio Show on Tuesday that WIOE’s format has been on the air for 18 years and its ratings have been solid, two factors that seemed to have worked against the move.

Despite his experience, Walsh said the digital AM signal worked as advertised with improved coverage and building penetration and less interference. “It just works perfectly all the way around,” he said. Listeners simply didn’t have the digital receivers to hear it today. Walsh hopes to one day resume WIOE’s digital broadcasts, and in the meantime it continues broadcasting in analog AM stereo.

‘Maybe The Future Is Not Right Now’

The most successful of the AM digital tests has been the experiment that has been running on Hubbard Radio’s adult alternative “The Gamut” WWFD, Frederick, MD (820). WWFD has been operating as a digital-only AM station since July 2018 under experimental authority granted by the FCC. Hubbard Senior Broadcasting Engineer Dave Kolesar said their strategy of encouraging listeners to switch to digital receivers has allowed WWFD to make the Nielsen ratings for the first time in years – it had a 0.5 share (12+) – and has “given value” to the station in the process.

Kolesar thinks what is different about WWFD is that its market passed the “point of no return” for analog AM listening a decade ago. “No matter what kind of compelling programming we could come up with, it just would not move the needle,” he said. Kolesar thinks the Fort Wayne market could soon find itself in the same situation as Frederick, and when that happens, digital AM’s appeal will grow.

“We all see where the trend lines of AM are going,” Kolesar said. “Maybe the future is not right now, but it’s not too far down the road.”

The National Association of Broadcasters has coordinated nine all-digital AM tests, spanning a variety of station types and geographic locations. David Layer, VP of Advanced Engineering at the NAB, said those tests were part of why the FCC decided to consider allowing all-digital AMs at its October meeting. The NAB is in favor of that move, arguing 70 million digital radio receivers are enough to start what will be a multiyear transition.

“There are bound to be some bumps along the way,” said Layer. “Every station is unique and as this transition continues, my expectation is that some broadcasters are going to experience what WWFD experienced – which is a surge in popularity and a cadre of new digital listeners. But some are going to have WIOE’s experience where listeners are going to not understand it and it’s going to be a more difficult decision.”

Testing Digital AM In Electric Cars

In its third year of the experiment, Kolesar said Hubbard has spent the past year focused on a number of technical issues, such as refining the station’s transmitter, antenna system, and documenting power measurement techniques. That data is being relied on by the FCC as part of its digital AM proposal.

What’s down the road for the project could have even bigger implications for radio. In the coming year WWFD will be used to test how digital AM performs in electric vehicles. “It has been shown that analog AM is often very poor in that environment,” said Kolesar, who called digital AM an “ideal solution” as more electric vehicles arrive in the market.

Other tests planned for the coming year will focus on varying bit rates, building penetration, and trying to use stereo technology on WWFD’s subchannel. Hubbard is also looking at what role digital AM could play in sending enhanced Emergency Alert System messages and exploring new data services.