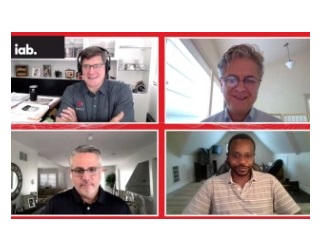 The message to advertising buyers at the Fall IAB Podcast Upfront on Thursday was clear – the once-niche medium is now mainstream and that is not only offering them new ways to reach their target audiences, but also adapt to consumer’s fast-evolving media consumption habits.

Podcasting is already “a huge driver” of consumption in the online audio world, said Triton Digital President John Rosso. “Podcasting isn’t new, but it’s really gotten mainstream attention over the last few years with 67% of Americans 12+ listening to podcasts on a regular basis and it’s a medium that has certainly gotten the attention of marketers with considerable growth in the volume of audio transactions happening,” he said.

As the number of podcasts climbs past two million, Audacy Executive VP of Digital Sales Ken Lagana thinks the diversity of content is helping drive the growth of podcasting’s reach and consumption by those who’ve already made the leap into the medium.

“Content diversity has really enabled listeners to go deep on almost any topic that they have interest in, and that really ignites podcasting’s broad-based appeal,” said Lagana. “You have this perfect storm of high quality content and production value which adds to the appeal of podcast listening and continues to bring in new audiences.”

What does that mean for ad buyers? “Virtually every demographic is now represented from a listener perspective,” Lagana told them. There’s also a growing roster of big-name personalities that are hosting shows, from actors and musicians to sports stars and top authors. “It enables people to make a personal connection with their audience that they haven’t been able to do with any other medium,” he added.

That massive growth in scale has opened new doors for podcasting when it comes to advertising, something not lost on Ad Results Media CEO Marshall Williams. He sees it as a way to bring people to audio that may have tuned radio out or who didn’t grow up with the radio habit.

“Now we have audio out there in the form of podcasting that has the same connective tissue that radio had years ago, so we have this enormous groundswell that’s happening with podcasting,” said Williams. “There’s tremendous scale. From a monthly active users standpoint, podcasts are second only to Facebook.”

TransUnion Senior VP Andre Swanston said that as scale has grown, so too has fragmentation as the number of publishers ballooned. “You have tons of different content available for different publishers and a consumer that is able to consume it on different devices,” he said. But that also allows for a variety of ways to target audiences with advertising. “That’s where you’re seeing the maturity of the ecosystem,” he said.

TransUnion works in the fast-growing connected TV industry, said Swanston sees parallels between the two. “What is less talked about is the huge jump in consumption of audio on smart speakers,” he said, telling the IAB audience that more than a third of Americans aged 12 and older have a smart speaker in their house.

The rise of smart speaker use is one of the biggest changes that Triton’s Rosso sees changing audio habits, for not only podcasts but also broadcast radio and music consumption. But they are also upending some of advertising’s ability to target a person or household since cookies and mobile ad IDs are obsolete on smart speakers. “We’ll need some sort of identity solution to support addressability,” said Rosso. “That is equally desired by both marketers and publishers because it enables commerce.”

Not far behind is voice marketing, which Lagana thinks has the potential to be a game-changer for the audio space. He sees that evolution already underway. “The way many consumers engage with brands is fast becoming identical to how they talk to their friends, which is a two-way communication through messaging apps and social media,” he said.

For content creators it allows for interactive stories that put the listener in control of the story. For advertisers, it could mean asking for more information on a smart speaker after hearing an ad or scheduling a test drive at a local dealership after hearing a car ad.

Williams has already spoken with Amazon about how his clients’ ads could leverage Siri technology to connect with potential product buyers. He said they remain “future-thinking conversations” but the executions would be fairly straightforward. Williams said it would also be very trackable, something that has strong appeal to brands.