Filling the void for an around-the-clock audio news source devoted to the Black community, iHeartMedia launched BIN: Black Information Network) at noon eastern today (June 30) on 15 AM/FM and HD Radio side channels and via the iHeartRadio app. Using such slogans as “This Is Where Black News Comes First” and “This Is Your News, Your Voice,” BIN will also provide a news service for the company’s 91 Hip-Hop, R&B and Gospel stations across the country.

The new network is being promoted as “the first and only 24/7 national and local all news audio service dedicated to providing an objective, accurate and trusted source of continual news coverage with a Black voice and perspective.”

In place of a traditional ratings-driven ad-supported business model, BIN will rely on sponsorship support from a group of founding partners who share its mission of providing comprehensive, accurate and trusted information and news. Launch partners, including Bank of America, CVS Health, GEICO, Lowe’s, McDonald’s USA, Sony, 23andMe and Verizon “will be able to deliver messages to BIN’s audiences and serve as a platform for philanthropic and community outreach to build brand connection and support the Black community, as well as use it for advertising messages as needed,” the company said.

Some BIN content will also be distributed as daily podcasts across iHeartRadio’s podcast network and a selection of iHeartRadio’s Black culture podcasts will also be part of BIN’s broadcast radio programming. A new daily 10-20 minute BIN podcast will launch shortly, consisting of news and culture analysis for the Black community. 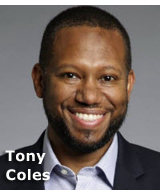 The company has appointed Tony Coles President of BIN: Black Information Network. Coles, who also serves as Division President of the iHeartMedia Markets Group, has more than 35 years of radio experience, from on-air to programming and management. Coles started his career as a programmer and an on-air personality, and has since served as National Hot AC Brand Manager; Senior VP of Programming for the company’s Chicago cluster and most recently as Executive VP of Programming for the company’s West Region.

Tanita Myers has been named Director of News Operations for BIN. Most recently an executive producer with Westwood One, Myers brings 15 years’ experience at Reach Media, where she was Director of Operations for “The Tom Joyner Morning Show; BIN: Black Information Network will also have an Advisory Board of community leaders from inside and outside the company. It is currently hiring for various positions.

iHeart says a study of Black listeners found that 86% believe a service like BIN is necessary and are likely to use it as an important news source, and 83% think BIN provides a key service and important information they can’t get on radio or TV today. The study turned up support for the network within both the 18-34 year old and 35-54 year old segments of the Black community.

“BIN: Black Information Network will fill a void by providing continual news and objective information with full focus on the Black community,” Coles said in a press release. “We began developing our 24/7 Black news source last year, and events of the last few weeks, especially the senseless and tragic death of George Floyd, highlighted the need for this network. Now is the time for our voice to be heard, and I could not be more proud of our work and the team we are assembling at BIN.”

Functioning as a standalone business unit within iHeartMedia and backed by its resources and financial support, the network will take advantage of the broadcaster’s news infrastructure, which has reporters located across the country and provides text, audio and breaking news to over 1,000 stations in the United States and Canada.

“We are pleased and proud to support the launch of BIN: Black Information Network by contributing resources that will have the greatest impact – our reach, our multiple platforms, our technology infrastructure and our broad, in-depth relationships with consumers,” said iHeart Chairman and CEO Bob Pittman. “The commitment to service, and the immediate need we saw for a news and information destination for the Black community, accelerated the launch of BIN: Black Information Network to serve this community in an important new way. We are honored to be joined by some of the most important companies in the world that are also committed to this mission.”

The network has received full-throated endorsements from its founding partners. “Keeping informed about events in our rapidly changing world has never been more important and BIN’s goal of delivering relevant, local news tailored to the needs of Black communities across the country directly aligns with Bank of America’s goals to strengthen and better serve local communities across the country,” said Meredith Verdone, chief marketing officer of Bank of America. Marvin Ellison, Lowe’s President and CEO, called the network “a pivotal moment in journalism that will help to create lasting, meaningful change by providing trusted, authentic information and dialogue that combats racism and discrimination through understanding.” Noting that there “has never been a more critical time to uplift the Black community,” Karna Crawford, Head of Consumer Media Strategy & Activation at Verizon said BIN “will provide a trusted news source that will help start conversations and further understanding.”