The Federal Communications Commission says it still hasn’t received any formal reports from Puerto Rican radio stations to its Disaster Information Reporting System as electricity and internet service is unavailable at most stations. But from on-the-ground reports it received on Thursday the FCC believes there are at least six radio stations operational on the island.

There are, however, no television stations broadcasting at last report. Things aren’t much better for cell phone services. The latest report from the FCC shows 95.4% of cell phone towers are offline—which is actually a slightly larger number than a day earlier. And it says that more than three-quarters of the cell sites are offline in every county in the territory. 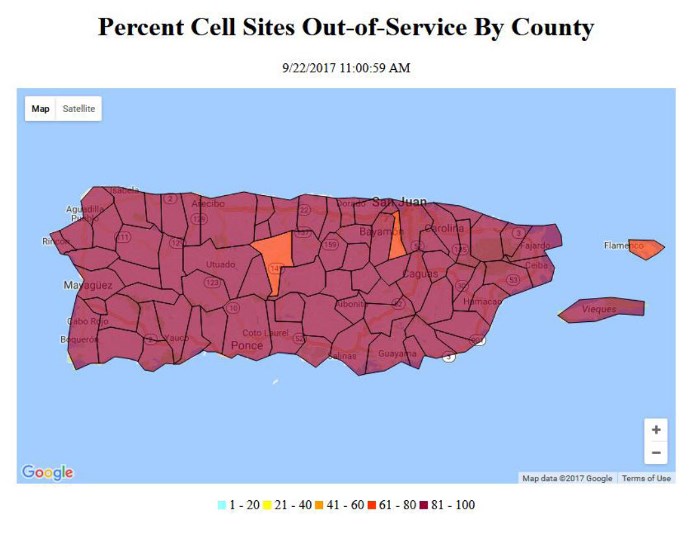 Without access to phones and TV, that means the handful of radio stations that remain on the air are serving as a lifeline not only for those affected, but also for friends and family on the mainland to connect with loved ones. In fact, the only way Gov. Ricardo Rosselló was able to communicate with residents of the battered island on Wednesday was radio.

Rosselló used Wifredo Blanco Pi’s Spanish news/talk “La Poderosa” WAPA network to inform residents that the government’s main goals are to reopen seaports and airports so shipments of aid can flow in, along with restoring telecommunications. With six AM signals (five of which remained on the air), the network allowed Rosselló to be heard across the mountainous island. "We're still standing,” he told listeners during a press conference.

When Maria smashed into Puerto Rico early Wednesday morning, it knocked most of the island’s radio and TV stations off the air. The WAPA network was the only AM signal broadcasting across the island Wednesday, while Spanish Broadcasting System’s reggaeton/urban AC “La Nueva 94 FM” WODA, airing from Bayamon, PR, was the singular FM signal serving listeners—after briefly being knocked off the air Wednesday—according to Jorge Blanco Galdo, Operations Manager of WAPA.

“Only news/talk WAPA 680 San Juan and [Puerto Rico Public Broadcasting Corp] WIPR [940] maintained on the air before, during and after the hurricane, using power generators,” Galdo said. “Within 24 hours after Maria passed, only WODA was back on the air.”

He tells Inside Radio that all television stations remain off the air, including Univision and Telemundo outlets, while “a very small part of San Juan has cell phones and internet. There’s no power service in all of Puerto Rico.”

WODA’s FM signal was able to reach listeners, thanks to a generator that has been purring steadily since the storm hit at dawn Wednesday. Sister station WNOD (94.1) in Mayaguez, is retransmitting WODA’s programming, covering the western part of the island.

“Before, during and after the hurricane, ‘La Nueva’ served as a key source of information for residents in San Juan and many rural communities on the entire island,” SBS VP Corporate Communications & Talent Relations Vladimir Gomez tells Inside Radio. “Powered by generators, the station has maintained open communications with its listeners and is also engaging via social media.”

The La Nueva studios were, in fact, hit by Maria, sustaining some damage and flooding, she says, however, the station’s antenna “is in an area where it was not damaged and was unaffected” on the island.

Details on what other stations remain on the air are difficult to come by, even for the FCC.

During the crisis, social media has proved to be as important an outlet for information as a station’s on-air signal. WODA’s dedicated La Nueva 94 FM Facebook page has become a gathering place for listeners to let friends and family know they are okay, while those with power are sharing photos of their neighborhoods, Gomez says. The station is also broadcasting from the studio via Facebook Live, which has fostered a staggering 19,000 views and 675 comments, as of Thursday at 3pm Eastern. In one post, the station wrote: “Tell us how the situation is in your village.” That has garnered almost 7,500 views and more than 500 responses.

The numerous images that are being posted to the station’s social media accounts are “ridiculous, crazy,” she adds. “Listeners are sending us pictures directly through our social media, and we’re letting them write comments to check in from the island and let people know they are alive. What we are seeing is that the biggest problems, the worst damage, is coming from the small cities on the island.”

Meanwhile, because the vast majority of the island remains without power, SBS is simulcasting some of its programming from WODA across its 17 radio stations on the mainland, in New York, Los Angeles, Miami, Chicago and San Francisco/San Jose. “So many are calling in to check on their family members, so it makes a lot of sense for us to transmit live across the nation, since there are Puerto Ricans everywhere across the States,” Gomez tells Inside Radio.

Meanwhile, SBS has already begun relief efforts for those affected by Hurricane Maria. The company is sponsoring an airlift and participating in a cruise shipment with a goal of sending 100,000 pounds of food and supplies raised by the company and its South Florida and radio and TV audiences. Royal Caribbean International, whose ship Adventure of the Seas is based in San Juan, will carry relief donations to the island. SBS is also flying a senior management group from the company to Puerto Rico to directly help in the relief effort.

Air talent at SBS’ radio stations in Miami joined forces to urge audiences to provide goods and to inform listeners and viewers on what’s happening on the island. Good collected Thursday through Saturday (Sept. 21-23) are expected to be transported to Puerto Rico by Sunday morning. SBS sister stations in New York, home to the largest Puerto Rican population in the nation, are also collecting food and supplies from listeners.

"We are united in tapping all of our resources to directly help the victims of Hurricane Maria,” SBS president and CEO Raul Alarcon, said in a release. "Our management, our on-air talent, our employees and our listeners and viewers are all pitching in to raise food and supplies to contribute to the massive relief effort underway across the island. We have a deep bond with our loyal audiences across Puerto Rico and we will remain with them in the long recovery and rebuilding program. We will also continue to utilize our FM radio station on the island to provide information around the clock to residents and their families in the U.S.”

Other Hispanic media groups are also quickly organizing relief efforts for both victims of this week’s Mexico earthquake and Hurricane Maria. Univision Communications will host a seven-hour live TV broadcast, Unidos por los Nuestros (United for Each Other) on Saturday, to benefit the American Red Cross.

On-air personalities and production resources from all of the company’s assets will come together for a celebrity-filled entertainment broadcast that will air on the Univision Network, on the Univision Deportes Network (UDN) and via Univision NOW from 7pm-2am from multiple locations, including Los Angeles, New York, Houston, Puerto Rico and Mexico City.

“As we witness the unimaginable devastation caused by the hurricanes and earthquakes of the last few weeks, Univision and our employees have a mission to mobilize and unite our communities and audience to show solidarity and help bring resources to so many people in dire need of assistance,” said Univision president and CEO Randy Falco.

As radio has continually been by the side of Americans during the catastrophic 2017 hurricane season, “radio broadcasters serve as a lifeline on which listeners can depend,” wrote Beasley Media Group CEO Caroline Beasley in a memo. “Not only did on-air personalities provide important information regarding listeners’ safety and the resources available to them, they gave listeners a human connection by helping them feel some sense of security: by being there to answer calls and providing a voice to those struggling throughout the storm. That is what radio is all about.”