The leaders of radio’s largest companies got 45 minutes of prime-time in front of scores of advertisers Tuesday as the Association of National Advertisers (ANA) presented “The State of Audio Today.” In a world where shiny new toys get all the attention, the group heads urged marketers to think of the 100-year old medium as one that has fundamentally transformed itself, while delivering companionship and one-on-one emotional connections better than any other media platform.

From distribution across smart TVs, smart speakers and numerous other digital devices to expanded content offerings with thousands of podcasts, radio is in a stronger position than ever to serve its consumers, the execs said.

“Radio is in a golden era,” Entercom President and CEO David Field said during the opening session of the virtual half-day event, presented by Radio Advertising Bureau. “Companies like ours are well positioned to take on a greater seat with our partner marketers in the years to come.”

As evidence of how the world’s largest brand marketers are now re-engaging with radio, the trio went beyond the obvious example of Procter & Gamble to note how advertisers in the pharmaceutical industry and other categories are now integrating radio into their media plans. “What they’re pointing to is our significant incremental audience reach in combination with television,” Cumulus Media President and CEO Mary Berner said.

What was once a “secret weapon” in the mobile wars for T-Mobile has now become its weapon of choice, said Bob Pittman, Chairman and CEO of iHeartMedia. “ 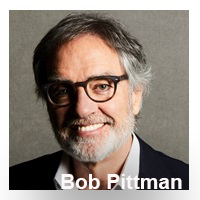 The proof is in the pudding,” Pittman said, noting the wireless provider consistently outspent it rivals on radio but underspent them on TV. “That made the difference – look at how many incremental subs they added each quarter versus AT&T and Verizon.”

The rap against using radio used to be that it wasn’t able to show attribution to advertisers. No more, the group said. “Attribution is now table stakes and radio is sitting at the table,” said Berner, pointing to a gamut of services broadcasters use to measure the brand impact, sales lift and increases in search and website activity of client campaigns.

The panel discussion, moderated by RAB president and CEO Erica Farber, explored how the COVID-19 pandemic helped jump-start consumer adoption of all the different ways radio is distributing its content. Pittman said consumers discovered iHeart’s brands on devices they hadn’t used much before for audio, like smart TVs, cable boxes and video game consoles and predicted these habits are likely to continue post-pandemic. And as jocks shifted to broadcasting from home, they became “a lot more empathetic” to millions of Americans who found themselves in the same boat. “It’s these people living the exact moment that the listeners are living,” he said.

in practical ways to help communities address “really urgent needs,” like food shortages at the onset of the pandemic, Berner said. The Cumulus Detroit cluster raised $400,000 in “about two hours” she said, while stations across the country helped local businesses weather the crisis by informing listeners about how they were pivoting to safely serve customers.

Field said the pandemic brought out “radio at its best” as familiar community voices provided essential info about how to cope with challenges while also offering “a source of great respite, comfort and companionship.”

Consumer behavior “changed radically” during the pandemic, Berner said, which affected radio listening which has since “recovered impressively.” But Pittman disputed the notion that listening declined as many Americans stopped commuting and starting working from home. Only Nielsen PPM measurement showed radio listening declines, he said, not its diary service nor a perceptual study fielded by Nielsen that found 28% of American adults said they are spending more time listening to the radio, compared to 17% who indicated they are listening less. “Our view is that PPM measures in-home poorly and in the pandemic if you’re not dressed for work you’re probably not carrying that meter,” Pittman said.

When Farber shifted the conversation to how radio can convey a brand’s purpose, Field said as the top reach medium it drives “great top of funnel awareness” while data and analytics show bottom of the funnel outcomes. “We are competing in a broader ecosystem across audio, which is surging, and sometimes I think advertisers lose sight of radio’s relative importance in the broader audio ecosystem,” he added, referencing Share Of Ear data from Edison Research showing radio makes up the largest piece of audio listening.

The execs singled out podcasting as a key growth driver for the industry. “We are not going to allow to happen to radio what happened to TV,” Pittman asserted, saying many of TV’s best shows and talent are now on Netflix where they are siphoning viewers away. In contrast, radio has embraced podcasting which he called “an extension of radio” that’s helping broadcasters grow their audiences and revenue.