After more than a decade of steady growth, it appears the party lights have dimmed at Facebook. The portion of Americans 12+ using the social media staple has declined in 2018, from 67% last year to 62%, according to the Infinite Dial study released last week from Edison Research and Triton Digital.

The 20th-annual data-rich survey—which is based on national telephone interviews with 2,000 persons 12+, conducted in January and February 2018—includes comprehensive statistics on social media usage, along with trends and statistics regarding the likes of in-car audio usage, internet radio, podcasting and smart speakers—which Inside Radio covered in two stories on Friday.

This year’s data surprisingly reveals that while Facebook remains by far the most-used social media service, usage is down or flat in every demographic age group, gender and ethnicity. “The shift in social media usage is absolutely one of the most compelling stories in this year’s Infinite Dial,” said Edison Senior VP Tom Webster, during the Thursday presentation. “It is entirely possible that we have reached peak social. It might not be as cool anymore.”

Social media usage overall also declined in 2018, to 77% from a peak in 2017 of 80%. It’s astonishing to see Infinite Dial’s data from 10 years ago—when a mere 10% of respondents said they had ever utilized any form of social media. 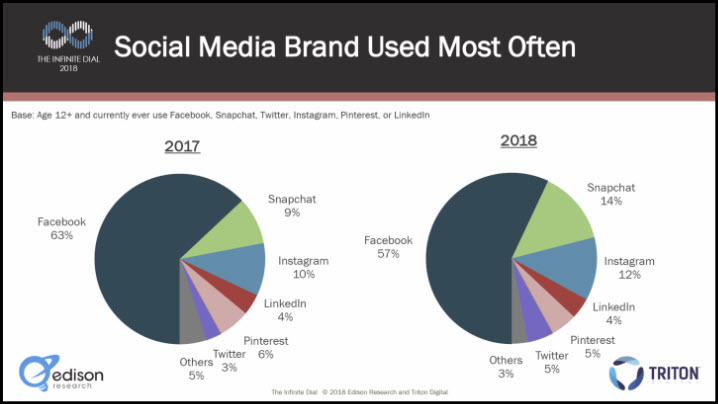