There is another part of life returning to normal, and radio has a hand in it. Music consumption grew 13.5% worldwide during the first six months of the year according to MRC Data. It says that was led by a 15% year-over-year increase in listening to audio streams. But it is not just digital that experienced growth. The data shows sales of vinyl albums more than doubled compared to a year ago.

“Consumers are relying on musical optimism to get them through the aftermath of a stressful year,” says MRC in its mid-year update. It points to an April survey that found 55% of music listeners said one of the most important things that the music industry can provide this year is offering “uplifting” and “happy” music. MRC says that is evidenced in some of the most-consumed songs so far this year, such as Dua Lipa’s “Levitating” (No. 2).

“There was a perfect storm brewing for this song, which is complex; there are several hooks throughout, with many changes in tone and cadence. This also speaks to the fact that we have seen very little burn on this record,” said Warner Records Executive VP of Promotions Mike Chester. “Radio certainly helped to thrust the song into the marketplace initially. Subsequently, TikTok absolutely stimulated the marketplace and gave it afterburners,” he said in the report.

Beyond radio’s traditional role in breaking records, an MRC tracking survey conducted in April also found 18% of radio listeners reported they are spending more time listening to radio than a year ago. 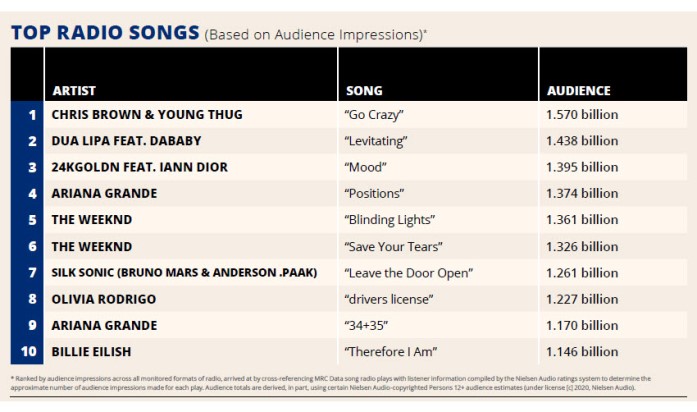 Including all media formats, MRC says Olivia Rodrigo’s “Driver’s License” is officially crowned as the most-streamed and most-consumed song during the first half of 2021. Taylor Swift is not far behind as “Fearless (Taylor’s Version)” had the biggest week for a country album since 2015. Morgan Wallen’s “Dangerous: The Double Album” dominated the first half of 2021 as both the most popular album of the year across all genres and the top country album. The set’s “Wasted on You” is also the most-consumed country song.

The company also reported that 2020 marked vinyl’s 15th consecutive year of sales growth, and 2021 has already seen major milestones for the format. Among all physical sales year-to-date, vinyl officially surpassed CD sales for the first time in MRC Data history (since 1991), with 19.2 million total vinyl sales versus CD album volume at 18.9 million.