Tech giants like Google and Facebook have come under increased fire in Washington as Republicans in particular believe conservative voices are being censored. That scrutiny is opening the door for broadcasters too, arguing that the digital platforms are stealing viewers, listeners and advertising dollars while facing none of the same regulation or public interest obligations that radio and TV do. That is putting media outlets at a competitive disadvantage, the National Association of Broadcasters has told lawmakers.

In a filing submitted to the House Judiciary Subcommittee examining the tech industry, NAB President Gordon Smith said radio and television stations don’t have an issue with their mandate to serve the public with news and information, saying such programming is never more important than it is today. But Smith said the “dominance” of the leading digital platforms “significantly and increasingly impairs” local radio and TV stations from capturing the advertising revenue they need in order to make that news and local content financially viable. “Not only do stations struggle to attract advertisers, both on-air and online, while competing against digital giants that dwarf them in scale and scope, but those massive platforms’ specific policies also impede broadcasters’ and other media outlets’ efforts to derive revenue from their content that consumers access via the platforms,” said Smith.

In NAB’s comments, Smith put the industry’s backing behind a bipartisan bill that would allow broadcasters and other news publishers to collectively negotiate with dominant digital platforms regarding the terms on which their content may be distributed online. The proposed Journalism Competition and Preservation Act (H.R. 2054) has also secured the backing of the local newspaper industry.

“Facebook and Google love us for our local content. But they are not contributing to the cost of gathering our intensely local and interesting news,” said Andrew Johnson, President of the National Newspaper Association.

To a casual observer able to find a local radio station website or webcast online, it may appear stations are working well with the digital giants. But the reality is much less benign, said Smith. He told the House subcommittee that the tech companies have “clear incentives” to keep their users on their own platforms, content and apps, and they have the engineering wizardry to achieve that.

The NAB contends that the tech platforms’ dominant role as content gatekeepers, particularly when it comes to their ranking algorithms used to determine what content to provide users, frequently favors controversial and polarizing content and opinion sources over local journalism. The trade group said that can often make it difficult for smaller, local publishers to reach audiences at all.

“These platforms’ technologies and unilaterally-set policies hurt local providers of quality journalism and prevent stations from effectively monetizing their own content online,” said Smith in the filing. “Receiving cents on the dollar does not enable TV and radio stations to recover the considerable costs of producing local content in the first place.”

But it is the impact on advertising revenue that is the most pressing concern, especially in a year when the pandemic has led to estimates that radio could face a 19% decline in revenue this year. And local TV could be down 6%, even with the billions it’s set to receive in political buys.

“Radio and TV stations from across the country have recounted losing multitudes of local advertisers across all industry sectors, and large percentages of their ad dollars, to digital platforms, including Google, YouTube and Facebook,” said Smith. “The massive shift in advertising to other platforms has profoundly affected local broadcasters. Stations in mid-sized and small markets with limited economic bases have been disproportionately impacted because any significant loss of revenue has an outsized effect on their ability to pay the largely fixed costs required to operate and to produce or acquire news and other programming.”

The NAB told lawmakers that news could be an easy place to cut, noting only a slight majority of TV stations report profitable local news operations. It’s even tougher for radio, where Smith said many stations in markets of all sizes struggle to make local news programming financially viable. 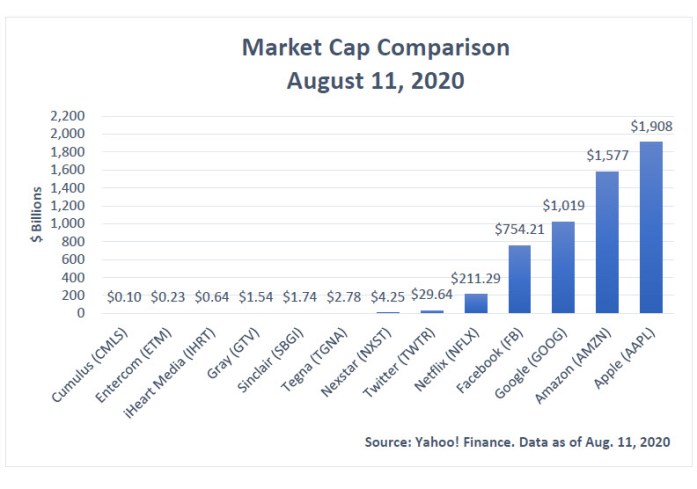