After returning to the airwaves four years ago following decades of radio silence, Procter & Gamble is now airing 200,000 spots on broadcast radio a week, for more than a dozen products. The consumer packaged goods giant is famous in marketing circles for conducting rigorous and sophisticated research to ensure its media mix is on target. New findings show the real-world impact its radio advertising has in generating incremental reach for company.

Because it makes products most people use every day, like toothpaste, toilet paper and dish detergent, P&G needs to reach as many Americans each week as possible. It uses a multimedia mix that includes broad reach media to do that. A Nielsen Media Impact analysis from May 2021 examines the reach lift that radio produces for 15 different P&G brands.

Conducted by Cumulus Media’s Audio Active Group, it shows 65% of persons 18+ were reached by the TV portion of P&G’s May 2021 campaign for its Tide laundry soap brand. When the AM/FM radio portion of the buy is included, the adult 18+ reach grows to 77%, an 18% increase.

The story is similar for all the brands analyzed. Bounty’s May 2021 TV campaign delivered a reach of 60%. When broadcast radio is included, that jumped to 75%, a 25% improvement. The numbers were even more impressive for Swiffer. TV produced a 50% reach. With radio in the mix, that jumped to 74%, a 47% lift.

P&G improved its reach for Oral-B by 65% by using radio in combination with TV. And it experienced a 56% improvement over TV-only by making radio part of its campaign for Metamucil.

In fact, the average P&G brand experienced a 36% lift in reach with persons 18+ by including radio in its media mix. 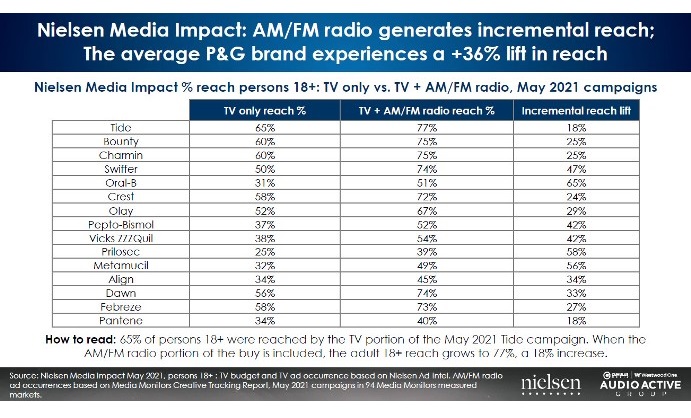 The Audio Active Group analysis shows the younger the demo, the greater the lift in incremental reach for P&G brands. Among 18-24 year-olds across 15 brands, P&G’s broadcast radio campaign generated a 159% average lift in incremental reach when compared to the reach of the TV-only campaign. For persons 25-34, the reach lift was 110%. Reach among Persons 35-44 grew by 63% and persons 45-54 increased 36%.

During a Radio Show panel in 2017, one of P&G’s top media and marketing execs said the CPG goliath wants to reach as much of America as it can, once a week. While TV had been its media cornerstone, John Fix, then Analyst/Manager—North America Media & Marketing at P&G, said TV was a costly investment that was no longer able to reach the entire population. “The brands are looking to get the reach they want and they can’t get it with TV,” Fix said. “Knowing that, radio seemed to be an option.”