After weeks of leaks and speculation, ESPN Radio has unveiled its new on-air lineup. Launching Monday, Aug. 17, the new weekday schedule is long on talent from the Disney-owned ESPN cable network, including the expected return of Mike Greenberg and a brand new morning show. “Greeny” isn’t the only personality coming back. All of the new hosts either currently work on –or previously hosted shows – on ESPN Radio.

Greenberg, who co-hosted “Mike & Mike” with Mike Golic in morning drive for 18 years before moving to the ESPN cable network, will host “The Mike Greenberg Show” from noon-2 pm. “In radio there is an intimacy in the relationship with the audience that is different from any other medium,” Greenberg said in a news release. “I have always enjoyed that and am really looking forward to rediscovering it.”

In another major change, ESPN is replacing “Golic and Wingo” in mornings with a new show cos-hosted by former NFL player Keyshawn Johnson. Both Mike Golic and Trey Wingo are approaching the end of their current deals with the sports media network.

As one of the first multi-platform media companies, ESPN says that all its radio hosts will also appear across its TV and digital shows, podcasts and other outlets to keep the conversation going on key topics throughout the day. The network has pledged that all its radio shows will feature newsmakers and topical sports and celebrity guests in addition to listener interaction via calls and on social media.

“Our new lineup will provide sports fans informative and engaging content throughout the week from hosts who all have radio experience,” said Norby Williamson, ESPN Executive VP & Executive Editor, Production. “They know how to connect with fans and keep them invested in the programming. Our listeners will hear diverse perspectives on key topics from some of the most talented, knowledgeable and contemporary voices in the industry.”

Replacing “Golic & Wingo,” the new morning show features Keyshawn Johnson, who hosts mornings at the company’s Los Angeles radio outlet, “ESPN LA 710” KSPN. He’ll be joined by basketball analyst Jay Williams, a former NBA player; and “SportsCenter” host Zubin Mehenti. ESPN says the trio will discuss the morning’s top stories and overnight developments with their own perspective and analysis. Johnson will regularly appear on “Get Up” and “First Take.” Williams – who is regularly heard as a guest across ESPN Radio’s studio show lineup – will continue his role on “NBA Countdown” and appear across the network’s TV studio programming. Mehenti has been a weekend voice on ESPN Radio in recent months and will also continue to host select editions of “SportsCenter.”

The Dan Le Batard Show with Stugotz: 10 am – Noon

Part of the national ESPN

Radio weekday lineup since 2015, the midday show is shortened by one hour from its current 10am-1pm slot. Le Batard, who also hosts “Highly Questionable” and the “South Beach Sessions” podcast, will continue to expand his reach in the podcast space through the Le Batard and Friends Network. Jon “Stugotz” Weiner anchors the “Stupodity” podcast. 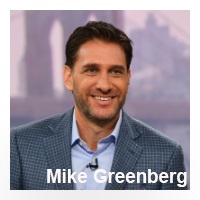 Host of ESPN’s morning show “Get Up,” Greenberg’s radio return lets him offer his take on many of the trending topics from that morning’s cable TV show. Greenberg previously co-hosted “Mike & Mike” with Mike Golic for almost two decades and was inducted into the National Radio Hall of Fame in 2018.

Kellerman is the featured

commentator on ESPN’s morning debate show “First Take” and host of “Max on Boxing.” Consistent with the new ESPN Radio blueprint, the radio show will allow him to expand on the most-timely debates from his TV show and talk about the latest boxing news. Kellerman previously hosted shows for ESPN Radio in both the Los Angeles and New York markets. This marks his national ESPN Radio debut. As earlier reported by Inside Radio, Will Cain has departed afternoons for a co-host role at “Fox & Friends Weekend,” signing off from ESPN Radio on June 26. that haven’t leaked in the numerous press reports preceding ESPN’s official announcement. Sarah Spain is an award-winning writer for espnW and ESPN Radio host who also appears on the network’s “Highly Questionable” and “Around the Horn.” The evening radio show reunites her with former co-host Jason Fitz – who will also continue as a commentator for ESPN’s digital shows and special event programming. ESPN says “Spain and Fitz” will pick up where it left off when the duo previously hosted together from January 2018-May 2019. Fitz hosted the short-lived national replacement for the Stephen A. Smith show – “First Take, Your Take with Jason Fitz” – which served as an extension of the popular morning TV program.

David Roberts, ESPN Senior VP Production says the new lineup and approach “underscores our commitment to expanding the scope and impact of some of our industry’s most versatile voices throughout the day and night.”

In addition to ESPN Radio affiliates, the new lineup can be heard nationally on SiriusXM, the ESPN App and ESPNRadio.com as well as via digital distributers Apple Music, iHeartRadio and TuneIn. “Keyshawn, Jay and Zubin” will be simulcast on ESPN2 from 6-8 am and ESPNEWS from 6-10 am. “The Dan Le Batard Show with Stugotz,” “The Mike Greenberg Show,” “The Max Kellerman Show” and “Chiney and Golic Jr.” will all be simulcast on ESPNEWS.