What a difference one hit show can make – even for a large podcast network like iHeartRadio. Powered by the return of The Ron Burgundy Podcast, iHeart’s U.S. Unique Monthly Audience jumped 26% in August to more than 23 million making it the biggest podcast publisher. That amounted to the largest increase in audience size of any of the publishers in the top ten, according to Podtrac. The achievement is especially noteworthy considering just how competitive last month was for podcasters.

Podtrac’s monthly report shows it was an especially strong month for publishers overall with every one of the companies in its top ten posting gains in their audiences between July and August. The company says the average month-to-month gain was 17%. But on a year-to-year basis the average increase experienced by publishers was 75%, compared to August 2018.

Illustrating the closeness of the race, NPR may’ve been unseated at the top but it still posted a 9% month-to-month increase in its U.S. Unique Monthly Audience which totaled 22.7 million. And on a global download and streams basis, NPR edged out iHeartRadio by about two million. The split looks a lot like the Podtrac results in February when The Ron Burgundy Podcast and Monster: The Zodiac Killer boosted iHeart to the top.

The rest of the top five remained the same, albeit with bigger numbers. No. 3 PRX posted a 15% increase in its U.S. Unique Monthly Audience, followed by the New York Times (+11%) and Wondery (+19%).

Podtrac says ESPN capitalized on a new NFL season and new content from 30 For 30 to see its audience grow 23% last month. But rival Barstool Sports grew too—by 17%—and managed to stay ahead of ESPN by nearly a million listeners.

WNYC Studios moved up one place to No. 8, thanks to a 23% increase in its monthly uniques, followed by This American Life Serial, which gained 2%. The Daily Wire dropped out of the top ten in August and that allowed TED to take its slot at No. 10.

The strong showing by podcasters in August suggests that, unlike broadcast AM/FM radio, the dog days of summer and the free time enjoyed by most Americans could mean more listening, not less. Analysts say it’s still difficult to know for sure since the medium is growing quickly and an influx of new listeners masks overall listening trends. 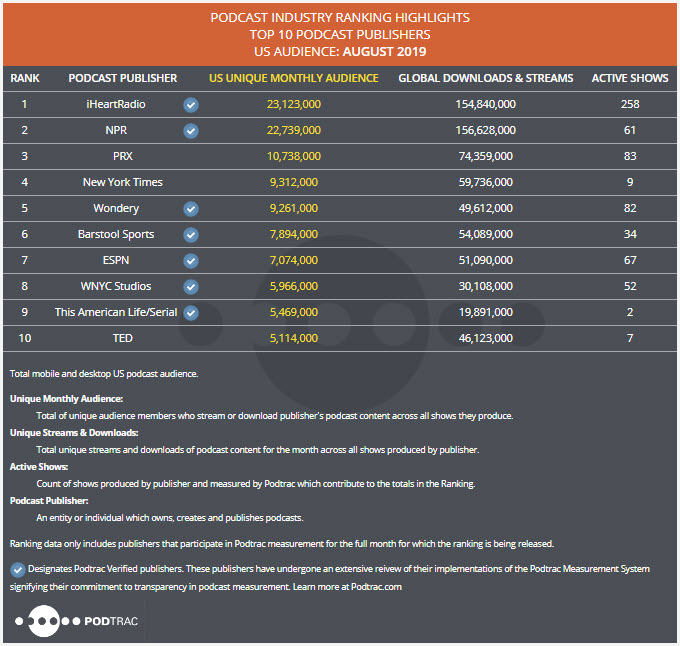