Rush Limbaugh is being remembered as a talk radio pioneer, the savior of AM radio, a persuasive communicator and bombastic entertainer who shaped politics and made friends with millions of Americans through the power of radio. Former Presidents, media moguls and fellow talk show hosts paused Wednesday afternoon to reflect on Limbaugh’s unparalleled career and indelible impact as his golden microphone went silent.

NAB President Gordon Smith called Limbaugh “a trailblazer on broadcast radio who brought a vast listenership to radio in general and to the AM band in particular.”

Loyal listeners of the talk radio kingpin learned the news of his passing from Limbaugh’s wife Kathryn, who read a statement at the start of his radio show Wednesday. “For over 32 years, Rush has cherished you, his loyal audience and always looked forward to every single show,” she said. “It is with profound sadness I must share with you directly that our beloved Rush, my wonderful husband, passed away this morning due to complications from lung cancer.”

Limbaugh had been battling stage 4 lung cancer for the past year. He died at his home in Palm Beach, FL at the age of 70.

Radio and podcast host Ben Shapiro called Limbaugh “the creator of talk radio and by extension the alternative media, [and] an indispensable and iconic conservative voice.”

At iHeartMedia, which syndicates “The Rush Limbaugh Show” via Premiere Networks, Rich Bressler, President, Chief Operating Officer and Chief Financial Officer, reflected on the loss. “With ‘talent on loan from God,’ Rush led the talk radio format for more than 30 years – a feat no other could have accomplished – and he set the standard for all those who followed,” Bressler said in a statement. “He was beloved by millions of fans across the country and we share the loss of their fearless leader.”

Premiere Networks President Julie Talbott added: “Rush has had an incredible impact on my life and on the lives of all of our listeners. Over the many years we worked together Rush was a wonderful and inspiring colleague, and he will surely be missed.”

Limbaugh’s conservative ideology may have served as talking points for the Republican Party but it was his showmanship, entertaining style and mastery of the radio medium that made him broadcast radio’s most successful talk show host.

Limbaugh hadn’t been heard live on the air since Feb. 2 as guest hosts filled in for the past two weeks. Premiere plans to air Best Of programming over the next several weeks.

Widely credited with reviving AM radio

Limbaugh first disclosed the stunning news that he was being treated for advanced lung cancer on his Feb. 3, 2020 show. He said then that the diagnosis had been confirmed by two medical institutions since he first noticed something wasn’t right on Jan. 12 of last year. 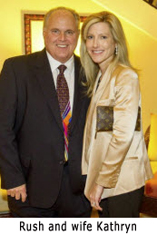 While Limbaugh offered occasional updates on his cancer treatments on his radio show in the months since revealing his diagnosis, he largely stuck to delivering the type of daily show that his audience, for decades, has turned out in droves for. But during his last show prior to the Thanksgiving 2020 weekend, he broke format for a segment to reflect on his career and to thank those who helped make it possible.

“I’m never gonna be able to adequately thank the people who are responsible for one of the greatest lives anybody could have,” he said on that show. “I am doing what I was born to do. It was what I wanted to do since I was 8 years old. I have met the goals I set for myself. I’ve maintained them. And I have been able to do it all, for the most part, on my terms.

“It cannot get any better,” Limbaugh continued. “I have been so thankful for the blessings that I have and to be able to share all of this with you and tell you how grateful I am, how gratified I am that you have made this possible.”

More reflections and remembrances of Rush Limbaugh in Thursday morning’s Inside Radio.