A check on the pulse of what was once considered to be the latest in a long line of perceived death threats to radio shows the once mighty Pandora losing listeners at a clip of nearly five million annually – down 14.4 million since 2018. 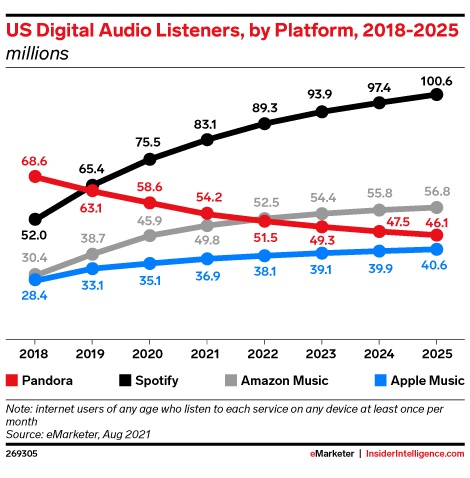 Regarding subscriptions to pureplay platforms, Spotify is the market leader, followed by Apple Music, YouTube Premium and Pandora. eMarketer doesn’t have access to the number of subscribers to Amazon Music independent of Amazon Prime users who get the music platform rolled into their plan.

A driving force behind the growth of Spotify is its podcast offerings. According to the report, Spotify will overtake Apple in podcast listeners to become the leader in the category among those tracked by eMarketer. “We expect Apple podcast listeners to plateau and Spotify listeners to keep increasing throughout our forecast period,” eMarketer says in its report.

Original material and exclusives accounted for 21.7% of total time that people in the U.S. spent listening to podcasts on Spotify, according to a company newsletter obtained by eMarketer’s Insider Intelligence.