As tens of millions of Americans enter week two, or three, of working from home, radio continues as a companion even outside the traditional workplace setting.

Nearly 40% of those who took part in a recent study conducted by NuVoodoo Media Services say they are listening to radio more during the health crisis. Breaking it down by daypart, 37% say they are tuning to radio more on weekday mornings; 36% are spending more time dialed-in during middays; 38% say they listen more during weekday afternoons and 26% are listening more at night. Additionally, 39% are spending more time with radio on weekends.

While there are concerns about less listening due to fewer commuters on the road, only 19% of respondents say they are listening to radio less on weekday mornings and 16% less in afternoons. 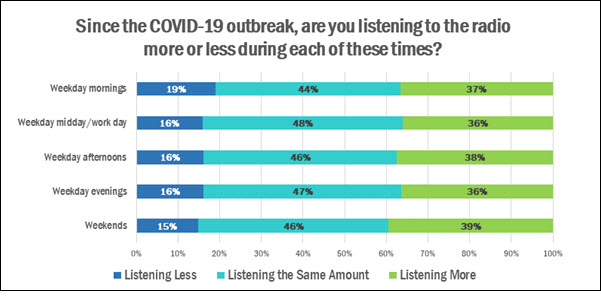 As expected, news stations are gaining more listeners, according to the study. Of the 5,000 16-54-year-olds who participated, 58% say they are listening to stations that provide news and information more, while 33% say they are consuming talk radio more since the outbreak. As for using radio for a musical distraction from reality, 35% are listening to their usual music-formatted station, while 29% are stepping out of their comfort zone and listening to a new or different station than what they had been prior to the current health crisis.

The majority (36%) of those polled in the NuVoodoo study say they are working from home, with 24% saying they are at home, but no longer working their regular job. Meanwhile, 19% say they are still reporting to work as usual outside of the home. Those who took part in the poll who were already part of the work-from-home workforce amounted to 15%. 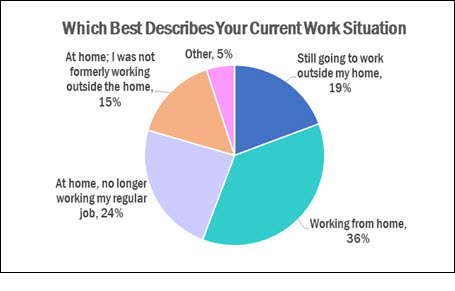 “Radio is at its best when there’s trouble, supplying vital information and entertainment,” NuVoodoo Executive VP of Research Insights Leigh Jacobs said in a release. “These numbers underscore the deep connection radio enjoys with its listeners and its communities.”

Carolyn Gilbert, President and CEO, added, “Radio remains a vital source of news and information to Americans from coast-to-coast, with listening increases this week across all major dayparts. This is a significant opportunity for radio stations and their sponsors to be there in meaningful ways for their listeners and communities that depend on them for news, information, talk and entertainment.”