There’s more evidence that radio listening is rebounding in May after declining last month due to stay-at-home orders enacted to stem the spread of the coronavirus. More than one in four core listeners (26%) say they’re listening more, compared to 15% who indicated less, according to an online survey conducted in mid-May by Jacobs Media. In April, only 18% said they were listening more to the station that sent them the survey.

The findings are from an online survey of 16,004 radio listeners in the U.S. and Canada, fielded from May 12-14 in association with the Radio Advertising Bureau. Respondents were invited to take the survey by a participating station, referred to as a “home station,” whose loyal listener database they belong to. That means the survey isn’t representative of the U.S. population or even all radio listeners. But it does offer directional insights from thousands of core radio listeners.

The study illuminates how radio listening – across platforms – has begun to rebound after April lows. As is the case during normal times, in-car listening leads with nearly half (47%) of those currently listening to their “home station” saying they listen to it a lot using a regular radio in the car. That’s up from 39% in April. “The car is already the leader, whether there is a crisis or not,” Jacobs said, noting that under normal circumstances the 47% number would be higher. “In-car listening seems to be in a state of recovery.” Regular radio at home came in second place at 27%, up from 22% in April.

Beyond traditional AM/FM receivers, streaming on various devices looked very solid in the survey, registering across-the-board gains since the outbreak began. Nearly one in four (24%) said they are listening more to the stream of the station that sent them the survey on its website and 21% are tuning in more on the station’s own mobile app. In addition, 14% are accessing the station more on a smart speaker; 13% are listening more via an aggregator app such as iHeartRadio or Radio.com; 12% said they are listening to their home station more on a wireless audio system such as those from Bose and Sonos; and 9% are spending more time with a podcast produced by the station that sent them the survey. All of these percentages are higher than in early April. 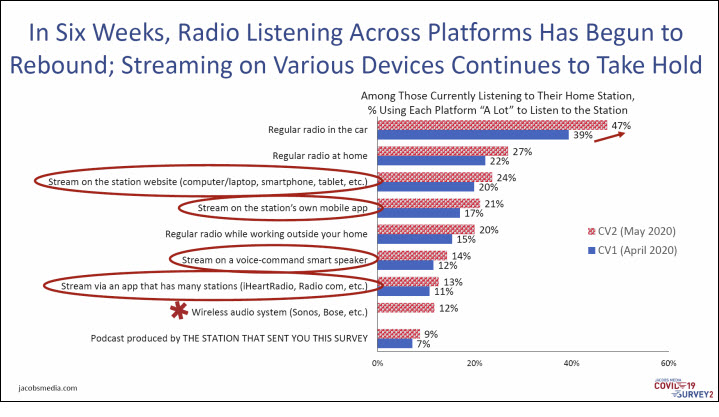 “Radio is doing a really good job at getting the message out that there are other ways to listen to the radio station,” Jacobs said. “These streaming distribution outlets are becoming more and more important.”

By comparison only 8% said they are listening more to satellite radio while 5% are using it less.

Streaming video and internet usage showed solid increases with a net gain of 47% for providers such as Netflix and Hulu.

But broadcast radio is also facing new challenges as a large portion of its audience is spending more time at home and less out and about. More than one fifth of these core radio listeners said they do not have a working radio in their homes that they use. “That’s where other platforms are beginning to come into play,” said Jacobs.

In a vote of confidence for programmers striving to find the right balance of information and entertainment during the pandemic, six in ten respondents rate their home station as excellent since the coronavirus outbreak, consistent with the April survey. Half say they feel a stronger connection to their favorite station since the start of the pandemic. And three in four feel their home station is playing the right amount of attention to COVID 19, up slightly from 71% in April.

Asked what they want more of from their favorite station amidst the crisis, contests & giveaways (39%), more music (39%), humor (38%) and programming that provides a distraction from the virus (37%) topped the list. Each was up from the April survey, especially humor which rose to 38% from 27%. “They want to get back to normal, they want to be distracted,” Jacobs said.