It’s little wonder that the morning-drive podcast The Daily is the most listened-to show according to Podtrac. A new survey of podcast listener habits and perceptions by Adobe Analytics shows more than half of them consume a show either on the way to work or while they’re on the job. That includes 42% who listen to a podcast while in the car.

Adobe Analytics also reports that it’s Millennials who are most responsible for podcast listening’s gains. The survey finds nearly a third of Millennials are consuming five or more podcasts per week. And the age group behind them, the so-called Generation Z, could soon close the gap. Two-thirds of Gen Zs said in the survey that they plan to listen to more podcasts in the coming year. The findings are based on an online survey conducted May 30-July 6, 2019 among 1,008 U.S. adults aged 18 and older.

In a positive sign for the medium’s monetization, the Adobe survey shows 60% of podcast listeners said they’ve looked up a product or service after hearing an ad and one-in-four went on to ultimately make a purchase. But illustrating the importance of strong creative, a majority (58%) also admitted that they’ve skipped through a podcast ad.

Still, among the 72% of podcast listeners who report they’ve heard an ad while listening to a podcast, a third said the format’s ads—many are host-read—are more engaging than other mediums. And four-in-ten said podcast ads are less intrusive than other platforms. It could be why only a quarter of listeners said they’re willing to pay for a subscription podcast service in order to avoid the ads. Even as content choice grows, the quality of shows isn’t deteriorating, according to those surveyed. In fact nearly three-quarters (72%) said they believe the quality of podcasts is improving, compared to just 6% who said they think it’s slipping. Online recommendations from blogs and articles are the place where most said they hear about new podcasts, with friends and family proving to be less popular sources among those surveyed.

“Comedy podcasts are the most preferred type of podcast, followed by educational and true crime,” the report says, showing nearly twice as many people would prefer to laugh or smile with a show they’re listening to than hear about a grizzly crime. Political and sports-themed content also proved to be popular. “No matter the subject, the majority of listeners prefers podcasts to be no longer than an hour,” the report said. 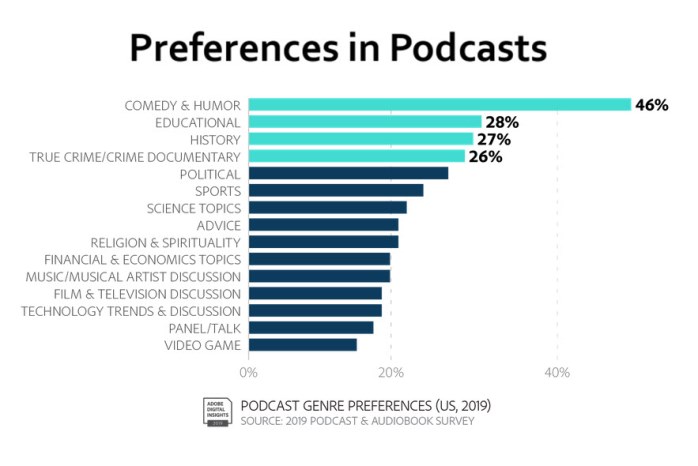 Some podcasters believe audiobooks could be the next hot genre and Adobe’s survey found there’s already a significant amount of crossover between the two mediums. The data shows 58% of audiobook streamers listened to a podcast before switching over to an audiobook. “Podcast listeners stream more audiobooks than non-podcast listeners, but prefer audiobooks over podcasts while participating in longer activities, like on airplanes, road trips, or vacation,” said Adobe.

Adobe also shared comScore data on unique visitors to mobile podcast apps showing the number of users jumped 60% between Jan. 2018 and July 2019. It notes that comScore data shows a quarter of current podcast listeners have started to listen to the format within the past six months. It predicts mobile listening will continue to see strong growth, since 45% of listeners said they plan to listen to more podcasts in the future.