Despite a downturn in sales, automotive remains one of radio’s strongest ad categories, typically No. 1 or No. 2 among radio’s biggest spenders. During a webinar chocked full of research and insights, Radio Advertising Bureau Senior VP for Professional Insights Jeff Schmidt presented a snapshot of the COVID-disrupted category heading into 2021 and how sales teams can bring more auto ad dollars back to audio and help drive auto sales for dealers. Here are ten top takeaways:

Number of Dealerships Down, Prices Up

Slammed by the pandemic, the number of new car dealerships fell from nearly 17,000 in 2019 to 16,646 in midyear 2020, according to the National Automobile Dealers Association (NADA). Meanwhile new vehicle sales prices are heading in the opposite direction, up 5% year-over-year in June 2020 to $38,053, its highest level since 2014.

Total service and parts sales for auto dealerships fell 17% to $51.9 billion year-to-date in June 2020, compared to $62.5 billion one year ago, per NADA data. That’s their lowest level since 2015. “If you’re only calling on the new or used car manager, or the general manager of the dealership, you are leaving lots and lots of money on the table,” Schmidt said. “We encourage you to develop a relationship with the service and parts manager – that’s the area where co-op is available.”

The NADA’s 2020 Midyear Review shows major declines in advertising dollars. Total franchised ad expenditures by year tumbled 17% to $3.73 billion year-to-date in June 2020, from $4.47 billion one year ago. In hand, ad dollars per new unit sold have fallen below 2016 levels to $600 in average dealership advertising per new unit sold, down 4% from $628 last year. “Don’t be discouraged because a lot of that is COVID-related and was forced because the manufacturers shut their plants down amid the virus and stopped making cars,” said Schmidt.

Radio Gets One In Ten Auto Ad Dollars COVID Has Increased The Number Of People Interested In Buying A Car...

Nearly one third of consumers surveyed by Ipsos (32%) say they are more interested in buying a vehicle than before the pandemic, while 52% say their intent has remained the same and 16% are less interested. Asked about the top reasons to maintain or increase their purchase intent, 55% said they feel safe from the virus driving their own vehicle, 25% said they assume there will be great deals to be had and 22% indicated their current vehicle is getting too old to drive.

… Yet The Number Of In-Market Shoppers Is Trending Down

As of mid-October, only 14% of consumers said they are in the market to buy a vehicle within the next six months. The percent has consistently trended down since the 20% reported by Cox Automotive in the early outbreak month of March. The top reasons for delaying a purchase are cost and financial concerns. In addition, new car sales are hampered by lower new vehicle supplies on dealer lots while used car supplies are close to normal and stable.

AM/FM radio is used as a key awareness driver for auto dealerships and its digital assets can be integrated further down the purchase funnel. “Radio continues to be that awareness factor, radio can drive traffic to websites and drive purchase intent,” Schmidt said. Six in ten (60%) of participating dealers in a 2019 Franchise Dealer Advertising study from Maryann Keller & Associates use radio as part of their advertising strategy because “it is valuable for specific promotions,” according to the study. 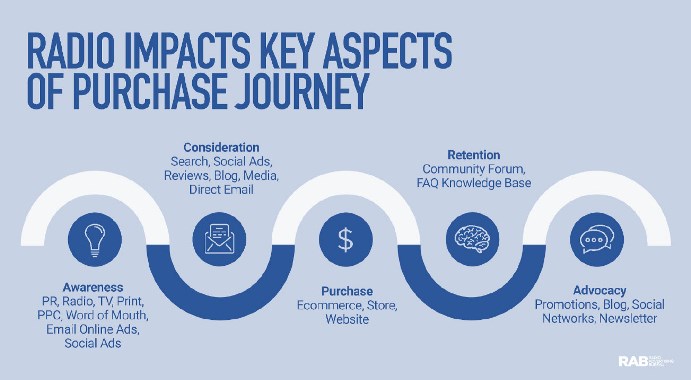 Creative Is A Key Sales Factor

Creative drives 47% of return on investment, according to a Nielsen Catalina Solutions survey of nearly 500 campaigns across all media platforms. Creative out-performed all other attributes, including reach (22%), brand (15%) and targeting (9%).

Few auto ads use female voiceovers yet top-ranked ads have a noticeable female presence, according to a Westwood One/Veritonic study. Among male auto intenders, the No. 1 ranked ad has a female lead voice actress.

There is a perception that auto ads on radio that require a disclaimer are perceived as “uninspiring” and “hard to listen to.” But a Westwood One study with Veritonic found just the opposite to be true. These auto ads are some of the best testing radio ads in America. Out of Veritonic's audio test database of 2,330 ads, the tier two automotive ads tested in the top 20% with an average total score of 76, outperforming the tier one auto average of 66 by 15%.