While plenty of familiar names are among the top radio advertisers in 2019, generally speaking, they increased their spot volume over 2018 levels. A fresh analysis from Media Monitors shows the top 10 aired a combined 15,199,263 spots on AM/FM last year, up by 1,829,342 from 2018. For the third year in a row, the Home Depot and GEICO held onto their No. 1 and No. 2 rankings, respectively, as Inside Radio reported Tuesday. In 2019, the home improvement giant aired 2,604,503 spots, while GEICO increased its instances by 301,909, according to Media Monitors data. Taking advantage of a strong job market, employment services company Indeed advanced to the No. 3 spot, up from No. 4 in 2018. Meanwhile, two new advertisers broke into the top 10. Internet gaming company Seriously Digital Entertainment made a serious leap from No. 42 in 2018 to tenth in 2019. And Sprint finished the year up 12 spots to No. 8.

Among parent advertisers, Procter & Gamble stepped up advertising instances on radio, rising to No. 2 from No. 5. Although the U.S. Government topped the parent company chart once again, the consumer packaged goods giant more than doubled the number spots it aired on radio over 2018, with a grand total of 3,671,569 in 2019 compared to 1,803,412 in 2018.

“Just as we predicted last year, P&G made a major push into radio in 2020,” Media Monitors President and CEO Philippe Generali said in a news release. “Advertisers across the board are finding value in the medium. In our rankings, nine of the top 10 increased the number of spots they aired – some of them by significant margins. Only McDonald’s ran fewer instances.”

Media Monitors rankings of the top 100 advertisers for the year shows, once again, GEICO was the nation’s top overall national advertiser, airing 6,900,687 spots across local cable, broadcast TV and radio. Though GEICO aired the most spots on local cable, where it ranked No. 1, it also heavily favored radio, where it came in second place. And while the ubiquitous marketer aired millions of auto insurance spots featuring its lovable gecko, it also placed plenty of other messages promoting other lines of insurance, including homeowners and rental policies. “From homeowners who chose to live in a snow globe or with a mime, to how buying insurance from GEICO is like playing football with Jerome Bettis, the insurer kept audiences engaged,” Generali said. “In their latest, the Sequels campaign, they add a viral element to their campaign encouraging viewers to vote on spots and share them.” 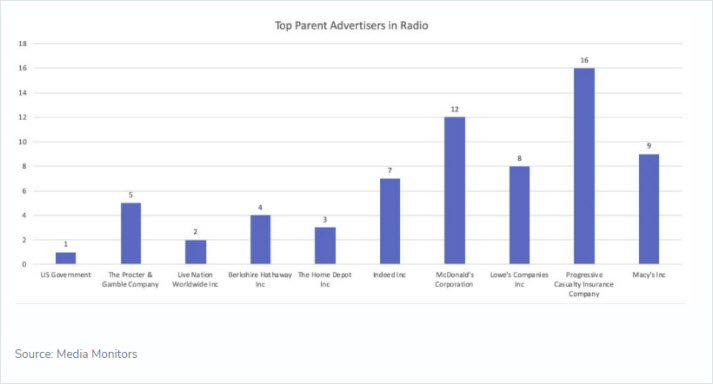 Just past the halfway mark of 2019, automotive and insurance companies revved up their advertising across radio, broadcast television and cable. The end of the year rankings proved they didn’t release the accelerator. Besides GEICO, insurers such as Liberty Mutual, Progressive and State Farm ranked in the top 10 in one or more media channels. Dealer associations for Chevrolet, Toyota, Ford and Nissan held on to their top 10 rankings in broadcast TV.

Local cable continues to be GEICO’s preferred medium. The company ran more spots on cable than in any other media – and 535,074 more spots than it did in 2018, landing it once again at No. 1. Two categories – insurance and fast food – accounted for seven of the top 10 at local cable.

For the third year in a row, GEICO aired the most spots on broadcast TV with 1,252,212, an increase of 26.7%. Progressive and McDonald’s rounded out the top 3. Together, these advertisers aired 3,351,867 spots. And yet, the category that led the broadcast TV list for airing the most number of spots was automotive dealer associations. Chevrolet (4), Toyota (5), Ford (6), Nissan (9) together accounted for 3,315,998 instances.

“As we dive into 2020, a strong economy certainly indicates higher advertising investment,” says Generali, adding that momentum is likely to remain strong for insurance companies and automotive dealers into the new year. But with a U.S. presidential election on the horizon, “brands will have to compete with campaigns for limited advertising inventory and the numbers of spots they air may not be quite as robust as we’ve seen over the last few years.”