There are many reasons why radio personalities do podcasts. On demand audio lets the audience listen on their own schedule, thereby increasing the number of listeners. Podcasting also introduces a show to people who may not be familiar with it. And, importantly, the channel attracts a younger audience than the one that tunes in on broadcast radio, sometimes much younger.

But the demographics flatten out considerably on the talker’s podcast with nearly identical audience composition proportions from 25-34 to 55-64, each accounting for about 18% of the audience. There’s a bit of a bulge in 45-54 which makes up 22% of the audience. At 10%, the 18-24 contingent is double the proportion for the host’s AM/FM show while the adults 65+ audience composition is one third less than the other two channels. 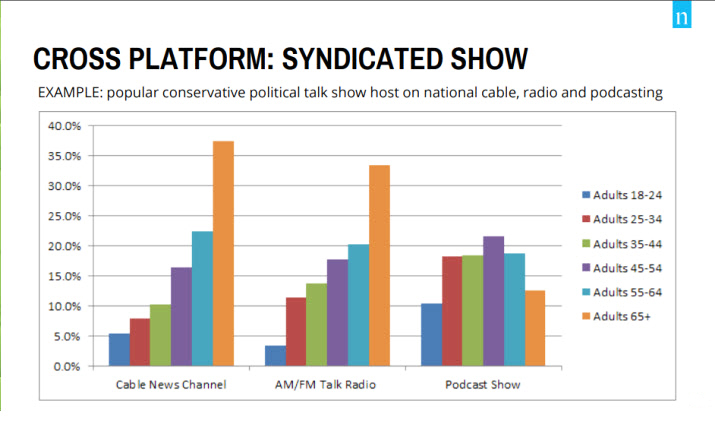 Part of this has to do with the demographics of each channel. Cable TV viewers skew old, podcasting leans young and radio falls in between the two.

“His audience skews very old on cable. It also skews old on radio,” Tony Hereau, VP Cross Platform Insights at Nielsen, told webinar attendees of the unidentified host. “But that same person who has a podcast, with the same content on the podcast, actually appeals to a younger demographic. It shows you how different the medium is aligned with the message.”