Why should air personalities continue to hammer the “ask Alexa to play” message? The numbers are clear – more Americans continue to ask Alexa and Google to perform all sorts of tasks for them. And already some data shows it is having an impact on radio listening on smart speakers.

The latest estimate from eMarketer show that 128 million people in the U.S. will use a voice assistant at least monthly in 2020. That is up 11% from 115.2 million last year. That represents 44.2% of internet users and 38.5% of the total population.

“Smartphones and smart speakers are the devices of choice for most voice assistant users, but use is also rising in cars, on smart TVs, smart home components, wearables, appliances, and other connected gadgets,” said Analyst Victoria Petrock in a blog post. The numbers also show voice assistants are now “mainstream” among U.S. consumers. “Millennials are the heaviest users, but use is rising among all age groups, including children, teens, and seniors, especially as more people work, study, consume entertainment, and conduct personal business from home,” she said.

Since the coronavirus changed media habits, several radio groups have reported increases in online listening. Jeremy Sinon, VP of Digital Strategy at Hubbard Radio, told Inside Radio recently that their stations saw big TLH increases on Amazon Echo devices and a corresponding dip in desktop streaming. “A lot of people traded their work desktop computer for listening on a smart speaker at home during the day,” said Sinon. While desktop streaming still produces at least double the listening hours of smart speakers, he said its share of total streaming has declined.

The advantage for a voice assistant is it gives radio listeners a quick and easy way to tune into a station stream, often at home where radio receivers are not as common as they once were. The challenge for radio is that Alexa and Google Assistant not only make it easy to find a radio station webcast, but any form of digital audio whether it is a podcast or a music streaming service. Pandora last month reported its listeners’ daily time spent listening to smart speakers grew 43% since the beginning of the year.

“The pandemic has accelerated the uptake of home-based, voice-controlled devices and changed audio listening patterns on all devices,” said Petrock. “As a result, we have adjusted our forecasts for voice assistant users and smart speaker users upward to reflect increased growth this year and sustained adoption going forward.” By 2022 it projects four-in-ten Americans will use a voice assistant. 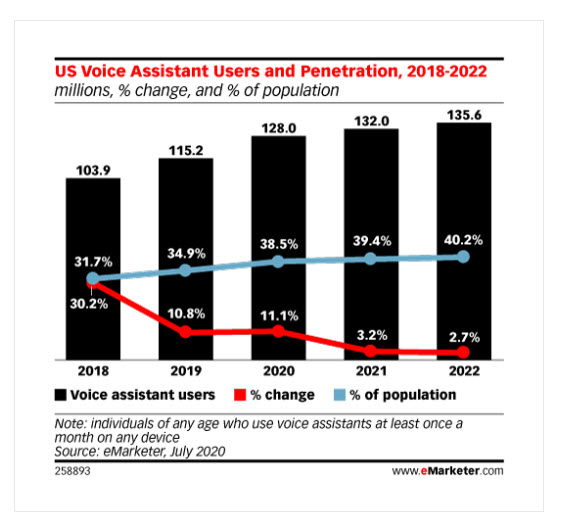 Analyst Predicts Global Podcast Revenue Will Top Over a Billion Dollars This Year.