After a long stretch of torrid growth, digital advertising revenue is showing signs of a slowdown. The IAB reports overall U.S. digital ad revenue totaled $57.9 billion during the first half of the year, up 17% year-over-year. “The growth rate, while still super impressive and leading pretty much any other industry, is beginning to show signs of slowing down,” David Silverman, Partner, PwC, said during a webinar Monday announcing the first half data. By comparison, digital ad revenues grew 23.1% between the first half of 2017 and first half of 2018. And for the first time since the Great Recession in 2009, first half revenues were less than the previous second half revenues, in this case by $30 million.

Still, the amount set another new record total for the digital advertising segment. “It is the largest first half year on record,” Silverman said.

Revenue in the second quarter reached $29.9 billion. That was up 16.7% from a year earlier but it was the slowest growth rate since first quarter 2015.

The deceleration is raising questions about whether digital’s growth rate will continue to slow down or pick back up. Brian Weiser, Global President, Business Intelligence, GroupM, notes that so-called digital endemic companies, which have been responsible for much of the earlier ad spend growth, are maturing. “Netflix is barely increasing their marketing spend in the U.S. after increasing it massively,” he said Monday, discussing digital ad trends on the IAB webinar. And don't look for small businesses to spur a big wave in digital ad growth. Most of them have already come online, and they’re taking “a diminishing share of the overall economy, not a growing one,” Wieser explained. What that leaves are the large brand advertisers, many of whom are already spending 40% of their budgets on digital advertising – some even more.

For digital advertising to continue to grow like it has been, Wieser postulates that traditional businesses will need to continue to evolve to digital business models. “If you think it will happen at a rapid pace on an ongoing basis, then you could argue for sustained high level growth in digital advertising,” he told webinar attendees. “But the opposite is also true.” For example, most banks shifted to online banking 10-20 years ago. “The question is how much has already happened and how much more is to come.” Posing a question—and yet not providing an answer—Wieser said there are credible arguments to be made for either outcome, that there will be a rapid pace of change for the next 10-20 years… or that it’s going to moderate.

Mobile Up, Desktop Down

Drilling down into mobile, the new IAB data shows time spent with mobile has grown 20% compared to a year ago, while desktop time spent slipped 7% during the first half. It means that more than three-quarters of all internet time spent is now through a mobile device. “Mobile is what is driving the growth. As consumers have shifted their viewing time from desktop to mobile devices, the revenue has followed,” Silverman said. The IAB says mobile ad revenue grew 29% to $40 billion during the first half of the year and now makes up 69.0% of total internet advertising revenues, up from 62% in first half 2018. In four short years, mobile and desktop have swapped revenue share. The saturation of mobile smartphone devices was a major factor in digital’s historical growth. But in another sign that a peak may be nearing, Silverman said the growth rate is slower than what it has been during the past several years.

Social media advertising continues its ascent, with revenues growing 25.7% in first half 2019 compared to one year earlier. Video advertising was also cited as a major contributor to growth, with spend climbing 36% year-over-year to a total of $9.5 billion for 1H 2019. 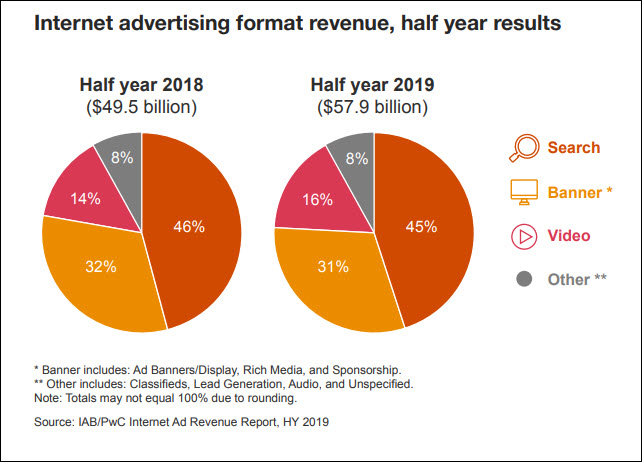 As Inside Radio reported Monday, digital audio revenue reached $1.217 billion during the first half of 2019, up 30% from the $935 million recorded during the first half of last year, as the number of Americans who consumed online audio, including podcasts, continued to climb. The latest Internet Advertising Revenue Report released by IAB and prepared by PwC reported audio’s share of the overall digital advertising marketplace remained steady at 2%.