Radio remains one of America’s two ongoing favorite media sources, second only to television. And Nielsen’s Q1 2016 Comparable Metrics Report offers an in-depth look at how adult consumers access television, radio, TV-connected devices, smartphones and tablets and how much they use them. In all, consumers spend 13 hours and 1 minute with radio every week.

After analyzing the just-released data, Stacey Lynn Schulman, executive VP Strategy of Analytics and Research for Katz Media Group, tells Inside Radio, “The latest Comparable Metrics Report from Nielsen is further proof that radio is not only strong, but still growing and not being cannibalized by newer streaming alternatives.” From her purview, “It’s all about stability, across demographics as well as dayparts. Radio remains a solid, reliable choice to deliver all audiences throughout the broadcast day.” 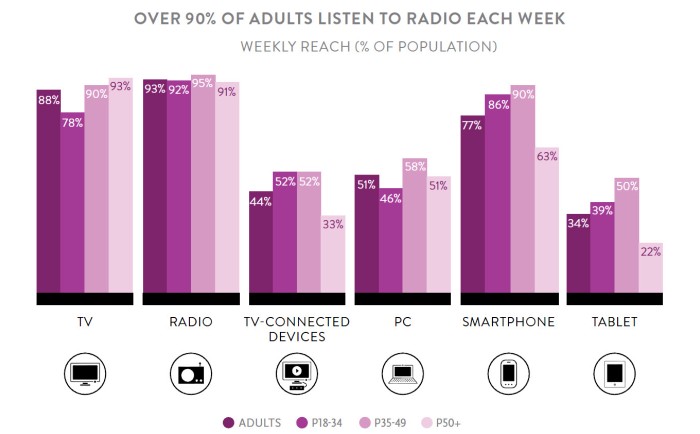 Among radio listeners, Hispanics rule the roost when the figures are broken down by demographic. According to the Comparable Metrics Report, the group also spends the most time with their smartphones. Among demographics, African-American audiences watch more TV that any other group, and Asian-Americans have the highest amount of advanced TV-connected device usage. Other metrics revealed in this latest Comparable Metrics Report include a host of bullet points about media usage from Nielsen: TV accounts for 47% of the total average audience 18+; smartphones, tablets, PCs and TV-connected devices now combine for half of the average audience 18-34; 52% of those 18-49 use TV-connected devices; and more adults 35-49 use smartphones, tablets and PCs than those 18-34.

And looking at the increased use of streaming audio, Schulman, like many industry experts, no longer sees it as a significant threat for traditional broadcasters. She says, “I wouldn’t say that streaming audio is a concern as much as an opportunity for radio broadcasters to tap into as we continue to grow our influence throughout the consumer’s day.”