For the sixth consecutive month the online mental health service provider BetterHelp was podcasting’s biggest advertiser. Magellan AI says it spent an estimated $4.3 million across 386 podcasts during February. That was down from $4.4 million in January. Geico remained the second-largest buyer of podcast ads. Magellan estimates it spent $2.6 million across 270 podcasts, a dip from $2.8 million in January. But insurance category rival Progressive bumped up its spending 27% to $2.3 million last month, and it moved up to No. 3 on the monthly ranker, up from No. 7 a month earlier. Progressive also went deep, with Magellan detecting its ads on 360 different podcasts.

NBC Universal and ZipRecruiter rounded out the top five.

Feather topped Magellan’s monthly list of movers and shakers – the brands that had the biggest month-to-month increase in their spending. It spent $354,000 last month compared to $38,000 in January. The millennial-targeted furniture rental services mostly directed its ads in the News category. Magellan says Feather ads appeared on shows such as NPR News Now and Wait Wait...Don’t Tell Me. Because Feather only operates in six cities, Magellan says it is likely those ads are being dynamically inserted.

Several better-known brands were also atop the monthly movers and shaker’s list. Farmers Insurance had a more than five-fold month-to-month increase in its podcast advertising while T-Mobile and Anheuser-Busch both more than tripled what they spent in January.

Magellan also reports ViacomCBS spent $199,000 to promote the rollout of its Paramount+ streaming video service. “Magellan AI detected Paramount+ on 19 shows in February primarily in sports shows,” it said in a blog post. 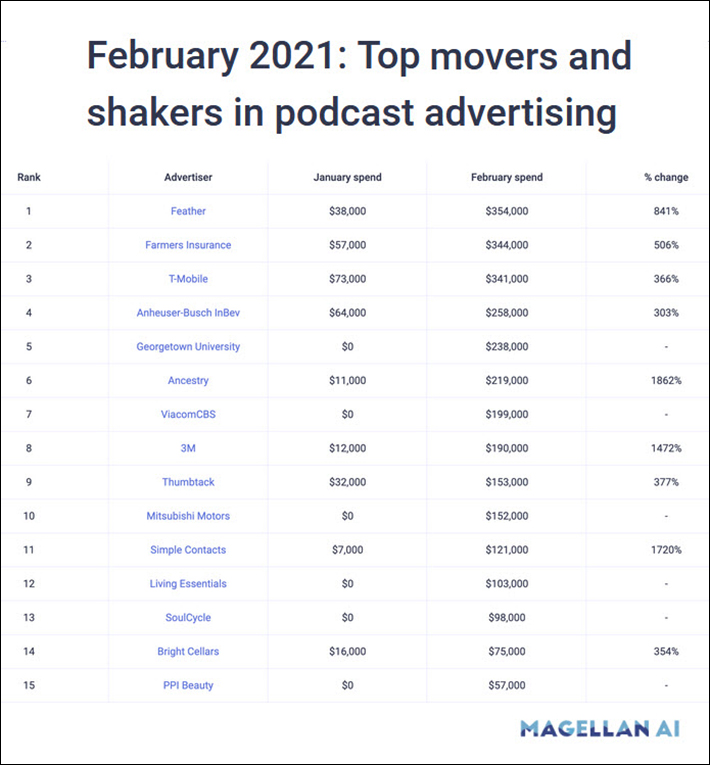