During the pandemic media habits changed and the amount of content consumed only expanded. On the audio side, smart speaker ownership climbed higher and one out of every two U.S. adults now listens to podcasts each month. On the video side, Nielsen says 30 billion minutes of content streamed during the first quarter of 2021. “Clearly there’s been tons of change for how we’re all engaging in content and the news is following right with that,” said Eric John, VP of the Interactive Advertising Bureau at the IAB Fall Marketplace Tuesday. That is opening new doors for news producers from traditional news outlets like NPR, Fox News and the BCC.

“It really provides advertisers with a way to reach consumers wherever they are. Podcasting is a great example of that,” said Jeff Collins, Executive VP of Advertising Sales at Fox News Media. “Traditionally we haven’t had access to consumers while they are commuting and now we do. Smart speakers are a whole new way for advertisers to reach consumers in the mornings when they’re getting their news for the day that didn’t exist several years ago. I look at all these additional channels as additional ways for advertisers to reach these consumers.” 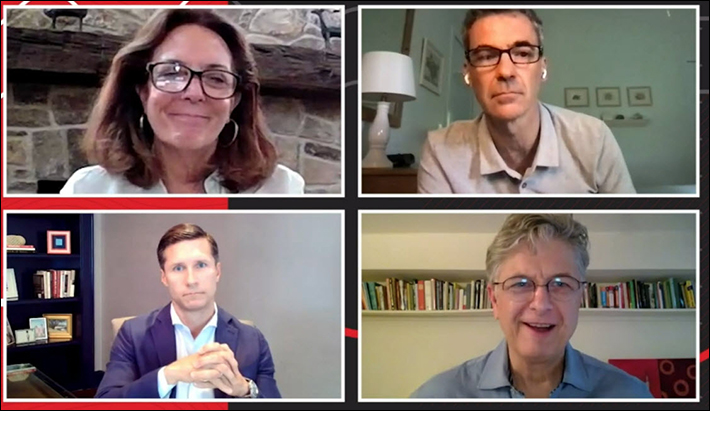 Although new habits have tilted toward digital, National Public Media President/CEO Gina Garrubbo said they don’t come at the peril of their broadcast radio listeners. “What we found is an insatiable appetite for audio news and it’s radio, it’s Spotify, it’s smart speaker, it’s YouTube,” she said. As a result, NPR has expanded its lineup of news programming and podcasts. The lineup now includes five separate daily news podcasts from its morning news Up Firstseries to Planet Money’s economics-focused The Indicator show and the science podcast Short Wave. “We’re reaching a younger and more diverse audience being on these digital platforms, and they’re asking for different types of news programming,” said Garrubbo.

Collins agrees new digital outlets work in tandem with more traditional media like its television or radio properties. “What’s very unique about news is that as you look to expand across multiple platforms, it doesn’t cannibalize your existing linear audience. In fact it’s additive,” said Collins. “You see a story on your phone, you’re much more likely to tune in that night to either hear someone’s opinion about that story or to see another newscast – and I think that’s unique to news, and potentially sports as well.”

As digital has ripped down the barriers between the brand and the consumer, William Greswell, Executive VP of Digital Strategy at BBC Studios, thinks for news producers the change has meant looking for ways to maximize the direct relationship they have with more engaged users. “It’s a higher quality audience because it’s one that has much deeper engagement with you and it’s a better quality relationship that you’re building on, and that’s something that I think resonates with the brands that we talk to,” he said.

Collins said ad buyers are also highly motived by the ability to connect with contextually relevant content, and that has worked in news outlets favor as their brands have used digital platforms to offer a wider array of content. “You can always find something that is contextually relevant for a particular advertiser,” he said. Collins said advertisers have also taken a “much more nuanced approach” to keyword blocking in recent months, to avoid content they don’t want to be part of while not blocking out large swathes of the internet.

Greswell said as consumers’ media habits change around the world, the BBC now thinks more about the totality of what they produce from television in the U.K. to podcasts. “Digitalization and globalization are two things that facilitate each other – it’s no longer you think about yourself as a media organization market by market or by separate audience platform-by-platform,” he said. “Really, what you’re thinking about is consumers and about consumers much more on a global level than you ever did in the past and that represents a massive opportunity,” he said.