Podtrac says downloads to shows and publishers it tracks grew 51% last week versus a year ago. And downloads were up one percent compared to a week earlier. The data shows that not only has the number of downloads been increasing, but the rate of growth has too, with August bringing the strongest year-over-year rate of growth of the entire year. The Arts, Business and Sports categories showed the largest week-over-week download growth of top categories at six percent each. Other genres that increased downloads included News and Science, both of which were up two percent.

There were small dips, however, for categories including Science and Society & Culture, both of which were off three percent versus the week prior, as well as for Comedy and True Crime, which saw downloads dip two percent. Those declines were likely more to do with release schedules than anything else, considering downloads for shows in both the Comedy and True Crime categories were still up more than 40% year-over-year last week. 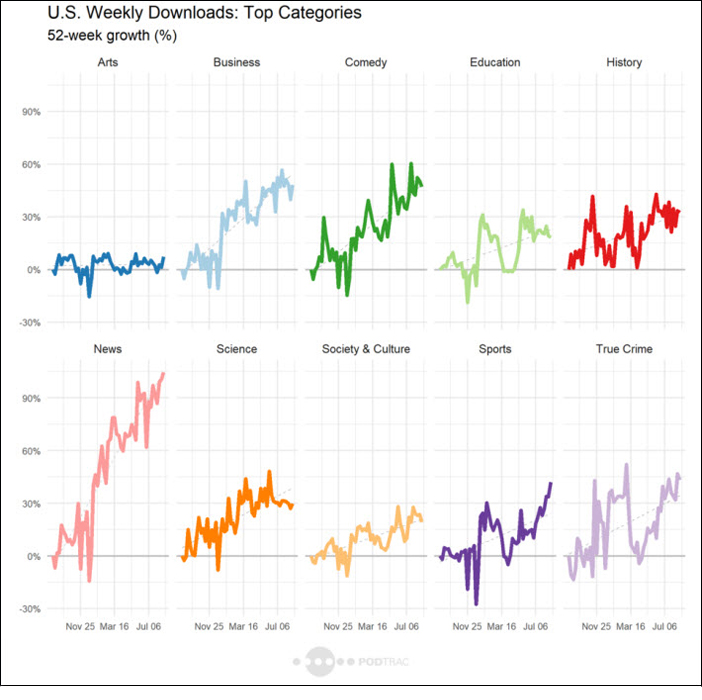 Podtrac earlier reported that the average U.S. unique monthly audience was flat month-over-month in July. But on a year-to-year basis Podtrac says there was an average 22% increase from July 2019. In terms of downloads, the top ten publishers had an average 4% growth between June and July, and a 72% increase in July versus a year earlier.