Podcast downloads jumped three percent last week among publishers that Podtrac measures. The company says that for the week of Nov. 8 downloads were also up by four percent compared to a year ago.

The increase comes as one of the biggest show categories – Society & Culture – had a strong week-to-week performance. Podtrac says downloads in that genre increased nine percent, the most of any category. Also posting weekly download gains were categories including Science (+7%), Religion & Spirituality (+6%), Sports (+5%), News (+3%), History (+3%), Comedy (+2%), and Arts (+2%). Among those categories that lost ground last week were Business (-2%) and True Crime (-1%).

Podtrac notes the category with the biggest year-over-year growth rate was sports – up 62% from 2020. That mirrors a larger sports media trend that has seen interest in live sports action on the upswing this year, with television sports ratings also higher compared to a year ago. 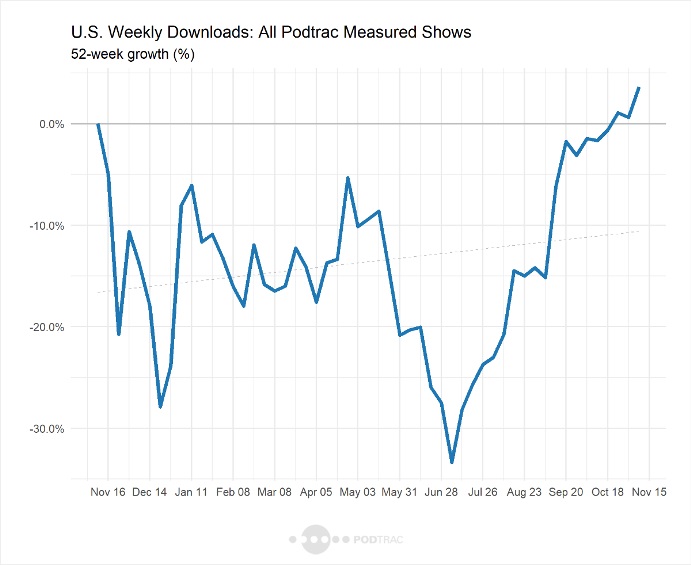 Podtrac reported earlier that during the month of October iHeartRadio had the most global streams and downloads with a tally of 321 million, which was a 14% month-to-month increase. NPR ranked second, followed by Wondery, the New York times, and ABC/ESPN parent the Walt Disney Company.

Overall, Podtrac says global downloads for the top 20 were up nine percent during October compared to a month earlier. But with more of the world open versus last fall, it notes downloads were down nine percent year-over-year.

Podtrac also reports only one of the top 20 publishers posted a decline in their unique monthly U.S. audience in October compared to September – the rest were either up or flat. It reports the average publisher had a seven percent month-over-month increase in their U.S. unique monthly audience last month, reversing a similarly-sized drop a month earlier. They were also up one percent versus a year ago.