There is a new top podcast publisher, according to Podtrac, which says the iHeartPodcast Network overtook NPR during April. The report shows iHeart had a monthly unique U.S. audience of nearly 22.6 million compared to NPR’s 21.8 million. NPR still had a slight edge in terms of global downloads, although both companies again topped the 200 million threshold, which kept them well ahead of the other publishers measured by Podtrac.

It’s not the first time iHeart and NPR shared the top spot. But when it last occurred in February 2019 it was iHeart with the bigger download numbers and NPR with the bigger audience.

In the remainder of April’s top ten, the New York Times remained in third place while PRX returned to No. 4 as it pushed Wondery back to fifth. Barstool Sports was steady at No. 6 while WNYC Studios was the biggest mover among the top ten, jumping to No. 7 — or a two-point advance from March. It was followed by NBC News and ESPN, as Westwood One returned to the top ten. 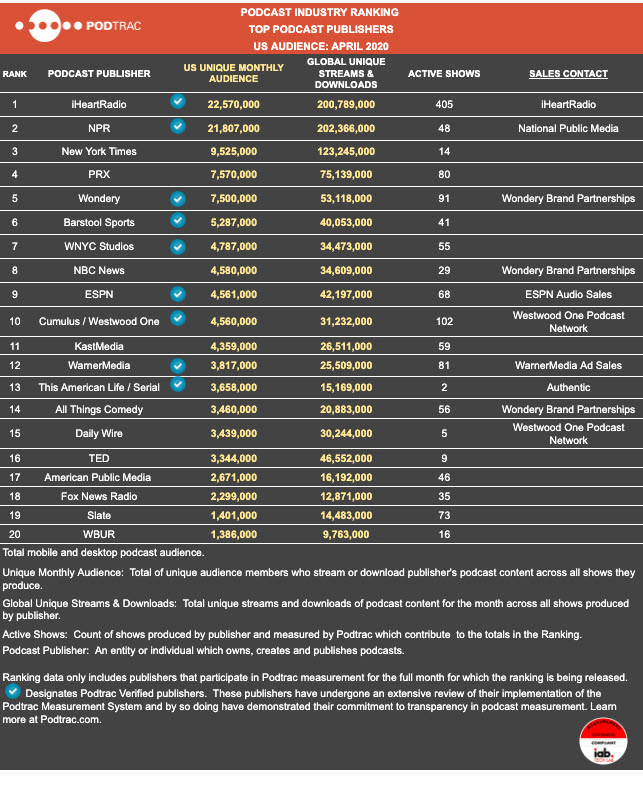 Similar to the long-term growth story for podcasting’s audience, downloads to shows released by the top ten publishers were also up. Podtrac says they grew by a 20% rate compared with a year ago, despite a 6% month-to-month drop when compared to March. And even with the coronavirus impact, three publishers — WNYC Studios, American Public Media and WBUR Boston — each had more downloads in April than in March.