“The Veritone Uplift Study” is based on a 15-month analysis of 250 local and national campaigns across 100 television and radio stations in the U.S. and Canada. The average broadcast campaign lift across the study, as measured by an ad’s impact on website traffic, was 6.6%. When compared with the average click through rate of leading digital tactics –– like display ads (0.64%), Facebook ads (0.90%) and email marketing (2.6%) –– this study shows that broadcast advertising can outperform digital advertising in driving traffic to advertisers’ websites.

The analysis shows advertisers got the most bang for their buck in middays, during which live reads were three times more effective than prerecorded spots at generating lift. Overnights generated four times the lift, compared to canned spots, but at a far lower rate of overall lift. 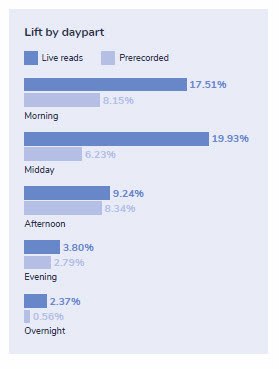 The Uplift study also shows that midweek is the best time to drive lift overall. Live reads perform especially strong on Tuesdays and Thursdays. Campaigns that aired on Tuesdays produced an average lift rate of 19.83% while Thursday generated 20.26%. Meanwhile, prerecorded spots garner about the same lift regardless of the day, generating slightly higher lift Mondays and Wednesdays.

The only significant drop-off in lift for prerecorded spots comes on weekends, during which live reads see a corresponding drop-off as well.

In comparing campaigns that ran in both the first and second quarters of 2020, Veritone found very little variation in campaign lift between the two quarters. COVID-19, which was in full effect in Q2, showed no negative impact thus far on broadcast advertising performance. In fact, Veritone’s analysis saw an average campaign lift of 6.5% for both Q1 and Q2 of 2020.

“Whether you’re a broadcaster or an advertiser, the inability to measure live ad reads and organic brand mentions in near real-time means you can’t fully maximize the value and effectiveness of a campaign,” said Ryan Steelberg, president of Veritone. “This is where AI plays a critical role. By providing broadcasters and advertisers the capability and data they need to quantify an ad campaign’s success and measure lift in real-time, AI becomes a game changer, elevating the value of the dynamic broadcast advertising business.”

The study also identified a half-dozen commonalities in the most successful broadcast campaigns across radio and television. Richness of the offer was the factor that contributed to the highest lift, exemplified by station contests and promotions that promise to save participants a lot of money, win big or get free services. Urgency and time sensitivity were also key ingredients found in the most successful spots, with teases like “offer expires this weekend or “sign up today to redeem.” Other common attributes in successful spots were intrigue and visual teasing, novelty, a clear call-to-action and an easy URL/web address.