The diversity of podcasting – both in its creators and the content – were on full display Thursday night as the third annual iHeartRadio Podcast Awards celebrated the industry’s best. The top prize went to Earwolf’s Office Ladies, which was selected by listeners as Podcast of the Year. “We are so thrilled. We have wanted to work together ever since ‘The Office’ ended, and this is a dream come from true for us,” said co-host Angela Kinsey.

Added co-host Jenna Fischer, “We absolutely love rewatching the show and sharing our memories with you.”

The award for Best Overall Host-Male went to Conan O’Brien for his Earwolf show Conan O’Brien Needs A Friend. “I have been on television for three decades, and this podcast is one of the most creative and fun adventures I have ever had,” said O’Brien, who also offered some words of wisdom for other podcasters. “If you’re starting a podcast, my advice to you is have more technical skill than I have,” he said, thanking his production team. 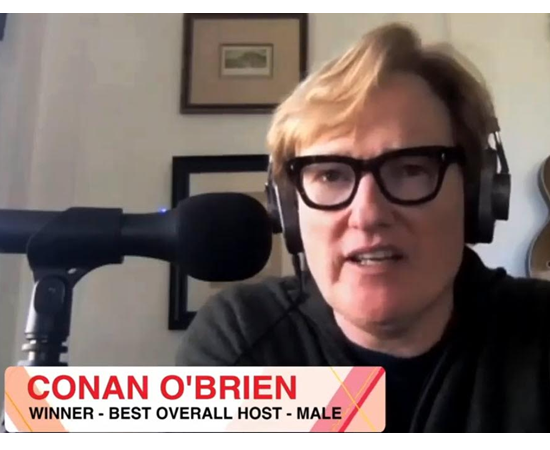 The prize for Best Overall Host – Female went to Nicole Byer of the Why Don’t You Date Me? podcast. “I have to thank every single guest I have ever had on my podcast because without them, there would be no podcast,” said Byer.

The virtual awards event was recorded at multiple locations and video streamed exclusively on iHeartRadio’s YouTube and Facebook pages and broadcasted across iHeartMedia radio stations nationwide. It opened once again this year with actor and comedian Will Ferrell, host of iHeart’s The Ron Burgundy Podcast. He joked the show was marking its 86th year. “iHeart, which didn’t even exist 85 years ago, had the foresight and wherewithal to establish the Podcast Awards. I mean, podcasts weren’t even around then, and now look at them, there’s one too many,” said Ferrell.

In the hot true-crime genre, Crime Junkie was named Best Crime Podcast. “When Audiochuck started, it was just us trying to get the word out for a local nonprofit, but it has become so much bigger,” said co-host Brit Prawat.

Added co-host Ashely Flowers: “We are committed to doing so much more advocacy work in the years to come, but it wouldn’t be possible without our listeners.”

Dolly Parton’s America, co-produced by OSM Audio and WNYC Studios, received the prize as Best Music Podcast. Producer and reporter Shima Oliaee thanked not only her team but the country music legend herself for allowing Oliaee to follow her around for two years, asking a lot of questions. “Looking forward into the future, even beyond 2021, I want to keep asking myself: what would Dolly Parton do,” said Oliaee.

The iHeartRadio Podcast Awards included several Icon Awards, including to the studio QCode which was honored with the 2021 Innovator Award for its work in the Fiction genre. CEO Rob Herting said they are looking to spread their wings further. “The hope is going to be to push into new genres and try things that are bold and distinctive and bring new audiences into this space” he said. “We want to continue to take risks, try new things, and encourage more fans to join the space.”

Baratunde Thurston, who has brought a career in social activism into the podcast space with his iHeartPodcast Network show How To Citizen was honored with the 2021 Social Impact Award. “There’s so many dope shows that are having social impact and creators and producers that are contributing to impact, so it feels good to be seen and acknowledged as part of that tradition,” he said. Serial Productions’ Sarah Koenig and Julie Synder received the 2021 Audible Audio Pioneer Award, presented by former Senator and Secretary of State Hillary Clinton. “Our first idea was to make a radio show,” said Snyder, who said a year into the project they decided to make a podcast instead, an idea that she was “initially cool too.”

Serial brought many new listeners to podcasting, even though it has not had one of the most prolific production teams. “Story first is kind of our ethos. That will dictate when a show comes out, how the show gets produced, how the show gets told – we’re trying to let the story determine that first,” said Koenig.

There was also the winner of another contest announced. Syndicated radio personality Dan Patrick, who announced last August that he had created The Dan Patrick Podcast Network in a partnership with iHeartMedia and Workhouse Media, had been holding a months-long competition with iHeartRadio in partnership with content creation platform Tongal to find and back the launch of a new series. Fans voted on the winner and Patrick said on Thursday’s awards show that Siena Jeakle and Lianna Holston won the competition with Frankly, My Dear, a new podcast tackling movie reviews from two friends who don't really like movies.

“We really thought it was a prank,” said Holston. Their show will be produced by Patrick’s network and released through the iHeartPodcast Network.

Here are all the winners of the 2021 iHeartRadio Podcast Awards –

Podcast of the Year:

All The Smoke (The Black Effect Podcast Network)

Wow In The World (NPR)

How To Save A Planet (Gimlet)

Unlocking Us with Brene Brown (Parcast)

You Must Remember This? (Karina Longworth)

Watch a replay of the iHeartRadio Podcast Awards HERE.