The number of podcasts grew by 687,302 last year according to the podcast search engine Listen Notes, which says the total number of podcasts now tops 2.75 million. The rate of debuts slowed last year following 2020’s record-setting tally of more than one million launches. Nevertheless the pace of new content coming online continues to outpace the pre-pandemic period. Listen Notes says last year’s number of debuts was more than double the 336,370 new shows that launched in 2019. Fewer new podcasts debuting also came with fewer podcast deaths last year. Listen Notes says there were 66,672 podcasts that were considered dead, a decrease of 26% from 2020 when it marked the largest number of podcast deaths reported in any year since Listen Notes began tallying the numbers in 2008. Listen Notes considers a show to have died when the RSS feed is deleted, or its iTunes “Completed” tag is marked “yes” by the publisher.

Listen Notes also says that of the 2.75 million podcasts that now exist, it calculates 1,166,939 or 43% of shows were considered “active” during 2021. It considers a show active if it published an episode during a specific year. 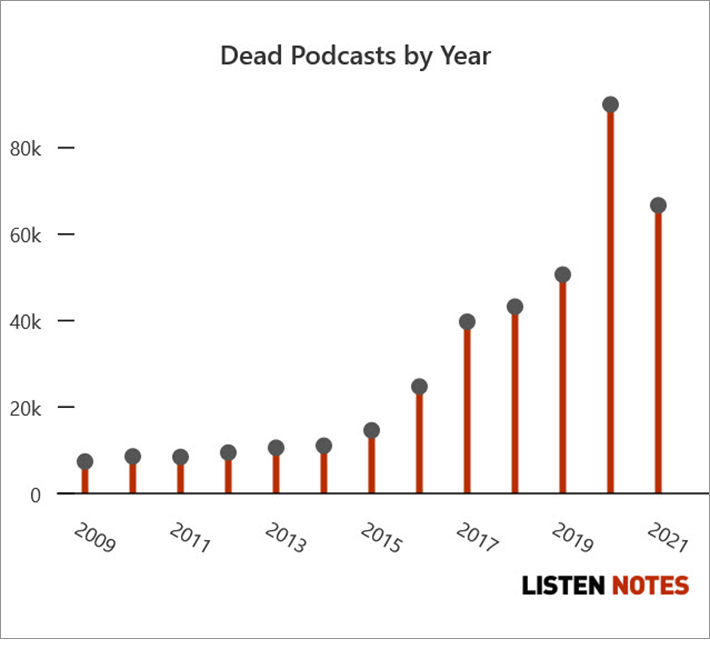 Similar to a year earlier, two-thirds of all podcasts in 2021 originated in the U.S. Not unexpectedly, most shows are in English. Listen Notes tabulates 60% were in English. That was a five point drop versus a year earlier. It reflects the growing number of Spanish- and Portuguese-language podcasts. The tally shows 12% of shows were in Spanish, a two percent rise from the prior year. And seven percent were in Portuguese, a one point increase from 2020 driven by the fast-growing Brazilian podcast market. Indonesian (5%) and German (3%) rounded out the top five.

San Francisco-based Listen Notes was launched in 2017 by Webian Fang, who in the latest update to users says Listen Notes now allows users to download audio and video clips.