Initial fears that the new stay-at-home lifestyle that Americans are living would chip away at podcast consumption have faded in recent months. Now there is new evidence that podcasting could emerge as a media winner as people carve out time to escape into a world inside their headphones. Rather than decline, Edison Research reports podcast fans expanded their listening time to 6 hours and 45 minutes per week on average during the second quarter. “That’s an extra half-hour of podcast listening every single week,” Edison SVP Tom Webster said on a webinar Thursday.

The Podcast Consumer Report data represents a stark turnaround from the first half of the quarter, when listening dropped to 5 hours and 22 minutes among those newly working from home. “Things have normalized, and not only normalized, but as far as podcasting is concerned a change for the better,” said Webster. “As we became adjusted to life in quarantine, we began to slot podcast listening back into our lives, back into our new workout routines or our new walking-to-the-store routines — all of the various new habits that we had to build up over the course of having to work from home the past few months.”

Edison Research had earlier said that people not working were spending even more time with podcasts. Through mid-May podcast listeners who had been laid off or furloughed were clocked at 6 hours and 35 minutes per week listening to podcasts.

Webster also released updated data from Edison’s Share of Ear report, which tracks audio consumption across all media on a rolling four-quarter average. It shows podcast listening now captures five percent of time spent with audio among Americans aged 13 and older. That is up from a two percent share that podcasts had during the same quarter in 2014 — or a 150% share increase during the five-year period.

“That ratio has shifted enormously,” said Webster. “COVID-19 has had something to do with that, but these changes have been building over time. But removing the commute from American lives has had a significant impact on all of these habits and podcasting has benefited from all of this.” 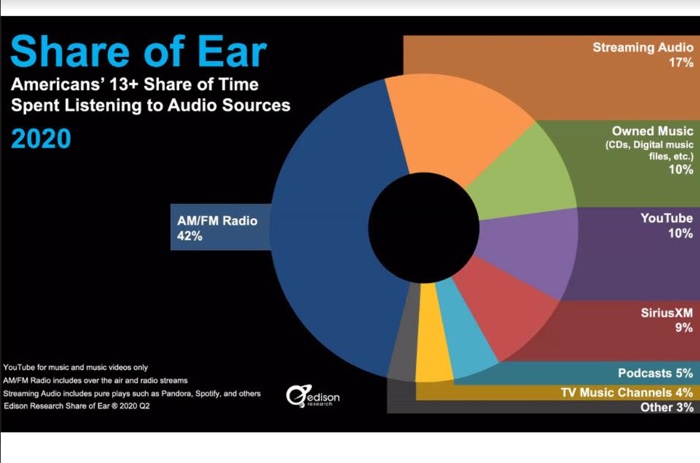 Edison said earlier that its data shows for the first time since it launched the Share of Ear study six years ago that during the second quarter Americans listened to more audio content from digital devices than analog devices.

The Share of Ear study requires respondents to keep a detailed daily diary of audio usage. The second-quarter data was collected in mid-May.