Podcasting is in the final weeks of what is forecast to be its first billion-dollar revenue year, and one reason marketers are flocking to the medium is listener trends. The just-released third quarter Share of Ear report from Edison Research shows that podcasting has captured a 14% share of ad-supported audio listening among Adults 25-54, the age group that advertisers focus on more than any other. That is more than twice what podcasting’s 6% share among ad-supported audio was four years go.

The Share of Ear data was released by Cumulus Media. It shows AM/FM remains the dominant ad-supported audio medium. And while Cumulus Chief Insights Officer Pierre Bouvard said there has been “some erosion” for broadcast radio listening, it is not going to the streaming services but rather to podcasting.

“Podcast audiences over the last four years have more than doubled from 6% to 14%,” said Bouvard in a video detailing the findings. As attention turns to the coming year, he said that history is often the best predictor of the future. “Podcasting is going to continue to explode,” Bouvard said, noting Edison Research showed in 2021 that 41% of U.S. adults listen to podcasting each month. He predicted podcasting’s monthly reach could bump up against the 50% mark in 2022.

In terms of revenue, the Interactive Advertising Bureau/PwC outlook for next year forecasts a 31% growth rate. 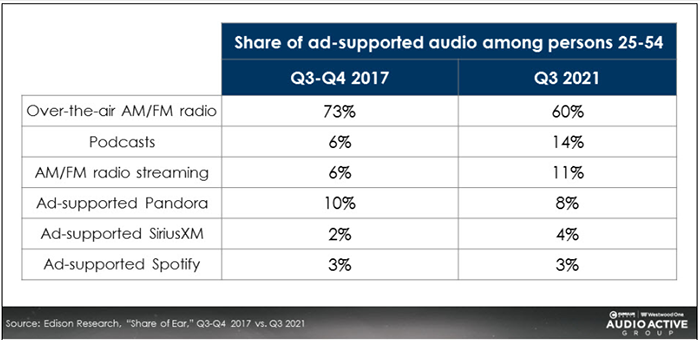 Edison’s latest Share of Ear report shows the reach of AM/FM radio webcasts has nearly doubled during the past four years, and its 11% share now totals that of the combined reach of ad-supported versions of Spotify and Pandora.

“There has been a little bit of erosion (as) Pandora has gone down two points and they’re in a state of constant collapse. SiriusXM has added two share points, and Spotify has not really grown,” said Bouvard. “Most of the growth of Spotify has come from their commercial free, subscription service but that doesn’t do an advertiser any good.”

Bouvard also pointed out that the combined reach of the ad-supported sides of SiriusXM, Spotify and Pandora have the same 15% share of the ad-supported market among Adults 25-54 that they did four years ago with satellite radio a “tiny factor” in the ad side of the business.

“Looking ahead, no doubt AM/FM will continue to be a dominant platform for ad-supported,” said Bouvard. “We predict AM/FM streaming will surpass the combination of Pandora and Spotify --mostly because pandora has been continually collapsing.”