There was certainly true-crime podcasts before Serial, but the breakout podcast helped ignite attention for the medium like no other show. In the years since, it has spawned a new generation of shows dealing with crime and punishment. A new Podtrac analysis of what shows are available reveals there’s a lot more to podcasting than stories tied to crime, and audiences are taking notice.

During the past year no Apple Podcast show category grew more than Business. Podtrac says the number of shows it tracks in that category jumped 77% between February 2018 and February 2019. The Games & Hobbies category was a close second at 75% followed by Health, whose show total grew 71%. Rounding out the five fastest-growing show categories were TV & Film (+68%) and Kids & Family (+66%).

Podtrac consistently reports the New York Times-produced morning podcast The Daily consistently ranks as the show with the biggest audience among those podcasts it tracks. NPR’s Up First is typically not far behind.

Podtrac says by its count the News & Politics category had the lowest percentage growth in the number of new shows during the past year, albeit with a still healthy 40% gain. The analysis shows the category had the largest absolute audience growth increase with shows in that genre now averaging more than 1.7 million unique listeners per month.

Perhaps fittingly, considering so much of comedy today is tied to current events, the Comedy and News & Politics categories are neck-in-neck in terms of reach. Comedy also topped the 1.7 million unique listener mark in February. Its year-over-year growth rate was 82%, compared to a 60% annual gain for News & Politics, no doubt helped by the big numbers posted by iHeartRadio’s new The Ron Burgundy Podcast which debuted at No. 7 on Podtrac’s monthly ranker. The fictional San Diego KVWN-TV anchorman character created by actor Will Ferrell will likely have an impact during the coming months. And the coming presidential election cycle no doubt will be helpful to both the comedy and news-focused genres.

The big tent category of Society & Culture, which at times seems like a catchall for podcasts, now averages about 1.5 million unique listeners according to Podtrac. It says the genre’s audience has grown by a third during the past year as the number of shows in this category has increased 46%.

True crime podcasts typically fall into Society & Culture and speaking at the RAIN Podcast Summit last month, Podtrac VP Velvet Beard said she’s noticed a pretty predicable cycle for shows in the genre. “When true crime shows come out they’ll jump up and appear in the charts and they’ll go away—I don’t observe that with other genres,” she said.

Sports is one of the categories with lots of choice, and Podtrac says the number of shows it tracks in the genre went up another 63% during the past year. But its unique monthly audience remains smaller than other categories with fewer than 600,000 unique listeners—a mere 8% growth rate during the past year. “There are a lot of new sports podcasts, but the audience doesn’t seem to be there,” Beard said.

Here’s a look at the numbers – 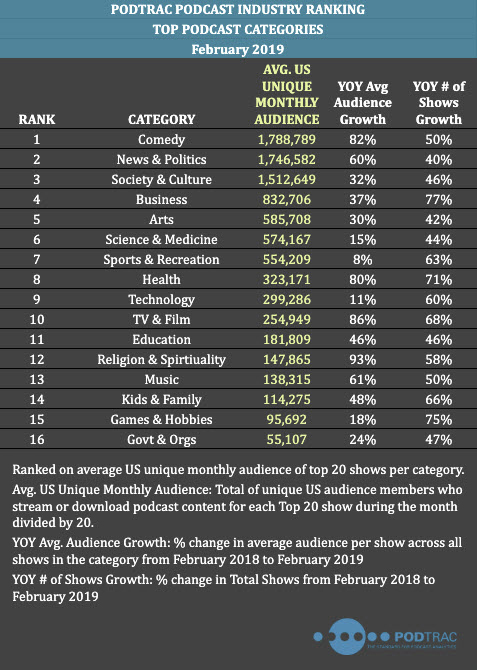