provoking podcasts that can appeal to the masses. It has had four series that have reached the top 10 on the Apple Podcast charts. In what may seem like a departure, Pushkin will soon launch its first true crime podcast called Lost Hills.

“We’re experimenters by nature and we want to make sure that everything we do is a really smart and good version of what it is trying to be,” said Weisberg. “We weren’t turning up our nose at true crime, but there is so much of it, we felt like it raised the bar for us in terms of how good something has to be. We think we finally got it with this show.” During a webinar for podcast ad buyers Thursday, Weisberg revealed only the Lost Hills show name and its host, New Yorker writer Dana Goodyear.

Gladwell said it should be no surprise that true crime series have been among the most buzzed about in podcasting when television is filled with crime shows and thrillers are best-selling books. “True crime is just our staple,” he said. “For some reason, the human mind just loves that particular genre.” Gladwell believes as podcast matures, the barriers that have separated content, such as the split between commentary and narration, will begin breaking down. “We call ourselves an audio company because almost anything can be an audio product. There isn’t a narrow thing called a podcast, it’s just a way to reach people,” he said.

Pushkin this month announced it was aligning with the iHeartPodcast Network to co-produce a slate of new, original podcasts over the next two years. The first two new Pushkin-iHeart productions are set for release in March 2021. And iHeart will become the exclusive sales partner for Pushkin’s catalog of podcasts.

“It’s an opportunity for us to branch out,” said Weisberg. “We’re excited to try things.” He said Pushkin and iHeart teams have already been brainstorming even though their formal arrangement has not even begun. “We see it as a really creative partnership beyond the sales side,” he said.

Doing Something Different Than Public Radio

Pushkin Industries launched two years ago after Gladwell and Weisberg found success with the Revisionist History podcast. The series, which launched in 2016, re-examines something from the past—an event, a person, an idea, even a song—and asks whether history got it right the first time.

Weisberg said the combination of the storytelling opportunity and the commercial opportunity attracted them to the medium. “The business really seemed to work,” he said.

The name of the company may sound like it makes wrenches in a rust belt city instead of digital content in studios around the world, but it has a close connection to Gladwell. 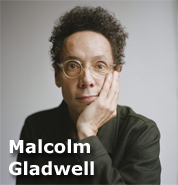 Not only is it a reference to a Russian poet, who like Gladwell is biracial, but it is also a nickname created by his father and that has followed him through the years. “This is the latest iteration of the Pushkin name in my life,” Gladwell explained.

Both men have journalism backgrounds – Gladwell was a longtime New Yorker writer and author, and Weisberg is the former CEO of the Slate Group and launched the Panoply Media podcast network. But with their new company their goal has been to create shows that are different than the public radio-type of podcasts that have become a go-to style for many producers.

“I was interested in working with authors,” said Weisberg. “It is such interesting alchemy when you put someone like Malcolm, who never worked in audio before, it just sounds very different from Radiolab or This American Life and lots of the signature shows from public radio in podcasting.” When he reached out to established authors and journalists, Weisberg said he was greeted with their excitement about working in a new medium. “Because of the storytelling potential that they never had, and the way people’s imagination is triggered by listening as opposed to just reading or video,” he said.

That halo also extends to advertising in Weisberg’s eyes. “It’s the only medium in which people don’t hate the ads. Everywhere else the ads are like a tax on the content,” he said. “On podcasts people have the option to skip the ads, and to an incredible degree don’t.” Gladwell’s live-read ads on Revisionist History have become such a listener favorite, that Weisberg said they are sometimes at risk of upstaging the show. “They’re enjoyable to listen to, and I’m not sure you need to say anything more than that,” he said. “If people want to listen to the ads, the ads are going to be more effective that they are in other media.”