Podcasting is on track to create a record number of new shows in 2019 while the number of “dead” podcasts is tracking behind last year. That’s according to the podcast search engine Listen Notes, which reports there are at least 811,331 podcasts and 54,802,288 episodes in the world.

With most of 2019 now in the rearview mirror, Listen Notes reports its database shows the number of new podcasts that appeared between January 1 and October 31 totaled 192,674. That represents nearly one in four podcasts. The running tally for 2019 is a 10.5% increase compared to all the new podcasts that launched during 2018, when 174,317 new shows launched during the full year. But this year’s tally is already the largest number of new show launches ever during a single year, according to Listen Notes data. The podcast universe isn’t just growing from launches, but also fewer shows disappearing. Listen Notes says 23,789 podcasts were determined to be “dead” so far this year. That’s on track to be the smallest number of so-called podfades since 2016. A record 31,374 podcasts died during 2017, followed by 29,395 shows going dark last year. The search engine determines a show is dead if its RSS feed is deleted or its iTunes complete tag is a “yes.” 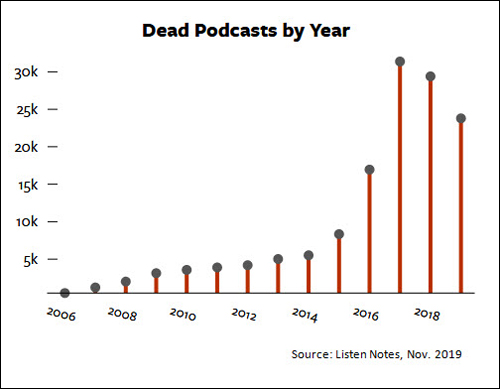 A majority (79%) of all shows are in English, with Spanish-language podcasts making up the second largest group, albeit at a much smaller 4%. It’s followed by German (3%), French (3%) and Portuguese (2%). The language breakout tracks closely with where shows are being produced. The U.S. is where 74% of podcasts originate, according to Listen Notes. It says Spain ranks second with 4%, followed by Germany (3%), France (2%) and the U.K. (2%).

San Francisco-based Listen Notes was launched in 2017 by Webian Fang who was frustrated with the search capabilities of both Apple Podcasts and Google. “If Apple or Google builds a better mousetrap, that’ll be a good thing for the podcast industry and listeners. Until that sweet day, I hope Listen Notes serves you well,” Fang writes on his website.