Smart speakers remain a small part of the podcast listening equation, but that may change as more devices are sold. And the numbers show ownership continues to expand. Global sales of smart speakers continued to “soar” in second quarter 2019, reaching 30.3 million units. That figure is nearly double from the same period in 2018, up 96%, according to new data from Strategy Analytics.

“Demand for smart speakers shows little sign of plateauing, even in more mature markets like the U.S., where ownership has now reached 30% of households,” said David Mercer, VP at Strategy Analytics. “Huge potential remains in untapped regions where local language support has been limited. The arrival of language localized devices in large markets like Russia, Mexico and Brazil will support further demand growth in the coming months and years.” Strategy Analytics forecasts the global installed base of smart speakers to exceed 260 million units by the end of the year.

With a 21.9% share, Amazon remains the clear leader, although its share has fallen from 29.1% in Q2 2018. This is its narrowest lead since the market began in 2014. Google retains second place, followed by Baidu, Alibaba and Xiaomi. Apple’s smart speaker sales increased 81% compared to a year earlier, although its share fell slightly and it continues to lag, in sixth place.

The challenge for podcasters may be convincing people to trade their smartphone headphones for a more shared listening experience on a device. The latest Voicebot research shows that while 39.9% have tried to access podcasts on a smart speaker on a monthly basis, only 26% have been successful. Edison Research reported earlier that its survey of monthly podcast listeners found 10% said the smart speaker is where they most often listen to shows. But many podcasters say smart speakers represent even less of their listening than that figure suggests. 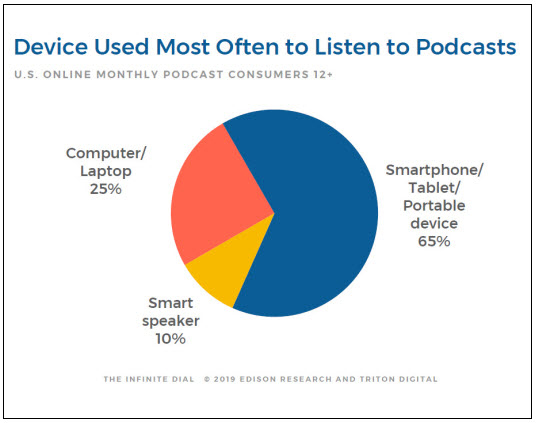 Goldstein moderated a panel at last week’s Podcast Movement conference in Orlando on the marriage between smart speakers and podcasts and among the ways his panelists said listening could grow is through better education for listeners and creation of stripped down and simple to use skills. (Read our story on the panel HERE). Goldstein said that because TuneIn is the default engine for podcasts, publishers need to test and make sure their podcast is properly listed and easily found on that skill. He also noted that right now there are about 1,000 podcast-related skills compared to more than 700,000 podcasts.

Goldstein told the Orlando panel last week he wonders whether smart speakers may ultimately prove to be simply a high-tech egg timer rather than a way in which people consume media.

For the attention smart speakers get, iHeartMedia CEO Bob Pittman reminded analysts on his company’s quarterly conference call this month that even as his company’s podcast listening was growing they shouldn’t overlook the bigger picture. “Radio already has the greatest number of reception devices of any media: one billion radios as compared to 229 million smartphones and 144 million laptops and netbooks,” Pittman said, pointing out the addition of new devices like smart speakers in the home have only increased listening opportunities for traditional radio.

In fact, a survey done last year by Code Computerlove showed two-thirds of U.K. smart speaker owners said the top use for their device was listening to the radio or other forms of music. That’s more than getting news or weather reports (50%) or timing their eggs (20%).