Driven by large increases in young and multicultural audiences, spoken word’s share of audio listening surged 8% this year and rose an eye-popping 40% over the last seven years. A new study from Edison Research and NPR shows there are 22 million more people listening to spoken word audio today than there were seven years ago. 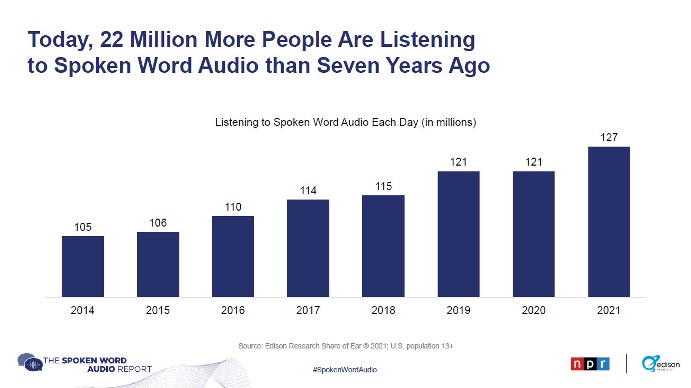 The new data shows spoken word’s share of audio listening is consistently growing as it gobbles up an ever-increasing slice of the total audio pie. While nearly three of every four hours of audio time (72%) is spent with music, 28% now goes to spoken word, up from 20% just seven years ago.

Spoken word audio is ubiquitous, the study finds, with 75% of the U.S. population having listened to it in the past month and 45% listening daily, up from 43% in 2020.

“That's pretty close to a majority of people listening to spoken word as more and more people bring audio into their daily routines,” Lamar Johnson, VP of Sponsorship Marketing at NPR, said during a Thursday afternoon webinar. “Marketers should be thinking about how they're incorporating audio into their strategies. That 45% of Americans translates to about 127 million daily listeners in the U.S. today.”

“While we're seeing growth and listening across many demographics, there are some groups of listeners that have especially high increases in time spent with spoken word,” said Edison Research VP Megan Lazovick. Although spoken word’s audience has traditionally skewed male, female listeners are quickly catching up. Nearly one third of men’s audio time went to spoken word in 2021, up from 26% in 2014. That’s a 23% increase in seven years. But women’s spoken word audio budget soared 71% during the same time span to 24% from 14% in 2014. The nation’s multicultural population is also a huge catalyst for the format. Hispanics/Latinos now allocate 27% of their audio time to spoken word, a staggering 80% jump from 2014, while African Americans devoted 22% of their time, also an 80% leap. White/Other grew by a smaller percentage from 23% to 29%.

The top reason people listen to spoken word audio is for multitasking, cited by 71% of monthly listeners. Six in ten say it is a productive use of their time. But the reasons run a wide gamut, from getting perspectives you don’t hear in other media (60%) to self-improvement (60%), to get a break from negativity (56%) and to hear hosts you identify with (55%).

And while most listeners cite the ability to multitask as one of the main motivations for listening, young and multicultural audiences are more likely to cite other reasons, such as connection, education, new perspectives and self-improvement. “Young and multicultural audiences are recognizing that spoken word audio can provide perspectives they are not finding elsewhere,” Johnson said.

Behind the consistent growth of spoken word audio is a growing number of listeners seeking out a new point of view, and to get meaningful conversation in a “surface level” digital world.

“While some might think of spoken word audio for telling stories about the world around us, our qualitative research pointed out that spoken word audio can provide an inward view. Listeners have noted how spoken word audio has become an important tool for everything from mental health to self-improvement,” Lazovick said.

“The Spoken Word Audio Report” from Edison Research and NPR is based on two studies: Edison’s ongoing Share of Ear survey which includes 4,054 respondents 13+ fielded online and offline and offered in English and Spanish. And a separate Spoken Word Survey made up of 1,000 online interviews of adults 18+ who consume spoken word audio monthly, which amounts to 75% of the U.S. online population. The studies were supplemented with interviews with spoken word audio listeners.