A growing number of brand advertisers are coming to understand what many direct response marketers already know: podcast advertising works. The answer to “why?” is also coming into focus, thanks to a just-released study, “Your Brain On Podcasts,” jointly produced by podcast publisher Wondery and Mindshare, the media agency that’s part of WPP’s GroupM. It shows there’s more than just live-read ads and snappy content at work. Instead, deep connections are being made inside the brain of podcast listeners, between the podcast ads they hear and what products they’ll later consider to buy.

Today’s modern media landscape has put advertisers into a battle not only for attention, but also trust. And the study by Mindshare’s NeuroLab found that when ads were run on two Wondery shows, Dr. Death and Life Is Short with Justin Long, the trust factor for the brand flipped from a negative to a positive. “Listeners trust the host of the podcast, and that halo effect benefits the brand,” said Hernan Lopez, founder and CEO of Wondery. Yet that’s not true on social media. That same brand had the opposite effect when it ran video ads on YouTube and Facebook. It was one of the more surprising findings to Lopez. “The fact that trust in the advertised brands went down after the exposure to a video ad on social media—that I did not expect,” he said.

Arafel Buzan, co-lead of Mindshare’s NeuroLab, said that connection between trust and podcast advertising was particularly interesting. “Given the personal, emotional experience of podcast listening that we saw in our data, it wouldn’t be surprising if podcast hosts became the next major influencers,” she said.

Trust however only gets a marketer so far. When it’s time to click a “buy” button, the shopper needs to remember the brand. And that’s where the NeuroLab’s research is especially enlightening. It shows podcast ads have a 9% higher average memory encoding level on a listener’s brain compared to the same brand ads on social media. “Consistent with previous NeuroLab results, audio advertisements increase through branding while digital video ads tend to suffer from conceptual closure,” the study says.

While that’s true for short 15-second spots, the gap is even more significant with longer one-minute commercials. NeuroLab says the data shows a “zone out” effort for video ads while listeners to podcast spots have “memory peaks” throughout the ad as they become more engaged with it. The result is researchers say podcast ads have a 38% higher average memory encoding level compared to the same brand ads running on social media.

It’s well-established that memories tied to emotions are more likely to be sustained over time and NeuroLab says that too is working in podcasting’s favor. Its data shows that podcast ads tend to be encoded on the brain with a higher emotional intensity than ads on social media. That’s especially true on longer one-minute ads, where researchers could see changing emotional levels as someone hears the spot. That suggests new emotions are being felt throughout the ad—similar to when someone listens to the show’s content.

The increase in brand advertising has meant more podcast ads than ever are producer-read. The research shows they outperform social media video ads. But it’s host-read spots – which still make up the majority of podcast advertising – that had the most pronounced impact. The data showed a 30% higher average emotional intensity level of host-read ads compared to social media ads. 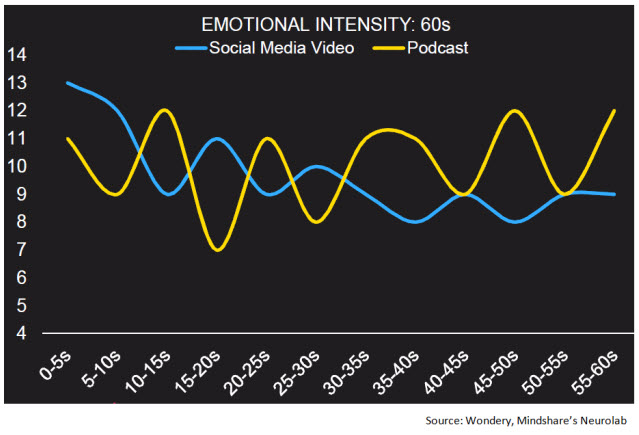 The style of that host read also makes a difference. In what’s sure to be one of the more utilized data points in the study, NeuroLab found that a host-read ad that used a storytelling style did the best when part of a narrative podcast—resulting in a 12% bump in emotional intensity. And when it comes to an interview style podcast, a host-read ad delivered a 7% increase in memory encoding. The study concludes host-read ads are great for delivering higher emotional engagement in storytelling shows while host-read ads result in higher attention levels for marketers who put their ads in an interview style show.

Lopez said the results speak in part to the work that Wondery has put into creating not only engaging live-read ads but also producer-read spots. “I personally think that podcasts are equally effective whether people are listening with their earbuds or their speakers, so long as the podcasts are engaging and command the listener’s attention,” he said. “At Wondery, we put a lot of emphasis in ‘active listening’ – we want to make sure listeners are ‘with us’ minute after minute.” Wondery and NeuroLab used this week’s Podfront San Francisco presentation to West Coast advertisers and agencies to unveil their research. Lopez said it’s the minds of ad buyers they’re looking to expand with their findings. “We want to position podcast ads as equivalent to video ads,” he explained. “They have CPMs in the same range, and I think this study shows that podcast ads are great if not better substitutes to video when it comes to emotional intensity and memory encoding.”

While NeuroLab may not be directly involved in the buying decisions being done at Mindshare, Buzan said the study could open clients to podcast advertising. “From our perspective, more and more of our clients have identified audio as a massive, and growing, opportunity,” she said. “Since the research found that the podcast space drives trust and emotional connection, we’re excited to execute campaigns to maximize impact in the environment."