The podcast industry’s efforts to reach a wider spectrum of listeners are paying off. An analysis of the podcast audience by Nielsen finds the medium’s listeners are now more diverse than the population overall, despite a growing reach that is bringing in a greater number of listeners of all age groups.

Nielsen reports 41% of monthly podcast listeners aged 18 and older are non-white. That includes 19% who identify as Hispanic and 13% that are Black. That compares to the overall U.S. population that is about one third non-white.

“Podcasting is now more diverse than the U.S. population,” said Tony Hereau, VP of Cross Platform Insights at Nielsen. “It happens with diversity of programming. There is a zero barrier of entry for anybody to get into podcasting and that has served the industry well because it has allowed for lots of different voices to come into podcasting and add content that they don’t get anywhere else.”

Several podcast publishers have made special efforts to appeal to non-White audiences. This month iHeartMedia said the launch of a podcast network targeting the Latinx community will be a top priority in 2021 after the launch of The Black Effect Podcast Network this year. It earlier set a goal of investing half of its new shows in 2020 and beyond from diverse creators, including women, African-Americans and Hispanics.

The Nielsen data shows no ethnic group has grown at a faster pace than Hispanics, with the number of podcast listeners among that demo growing six-times since 2010. Podcasting’s reach among Hispanics has increased from 1.1 million to 6.8 million among those who said they had listened to a podcast in the past 30 days.

The Black and Asian American podcast audiences have both grown five-times during the same period. Among Blacks, the audience size has jumped to nearly 4.2 million who said they had recently listened to a podcast. And more than two million Asian Americans said the same. On a webinar this week, Hereau said the “other” category” also saw sizable gains. That breakout mainly includes Native Americans and Indian Americans, he explained.

Another positive for podcasters is that Whites – who make up 59% of monthly podcast listeners – are still a growing audience for the medium. Nielsen says there has been a four-times increase in the size of the White monthly podcast audience since 2010. “We’re talking about huge growth that we’re seeing in the podcasting space,” said Hereau.

The data helps reveal why a bigger portfolio of shows can work in the industry’s favor to reach more diverse audiences. Overall, Hereau said the Comedy genre typically attracts the most ears. But Nielsen’s data shows different ethnic groups are also more likely to gravitate to different podcast genres. History podcasts have the biggest appeal among Whites, while Music podcasts over index among African Americans. Technology podcasts appeal most to Asians and Hispanics are most interested in podcasts focused on Kids & Family.

“You see some podcast categories that are common, but you also see a lot of diversity with a lot of different content that appeals to people in different groups,” Hereau said. 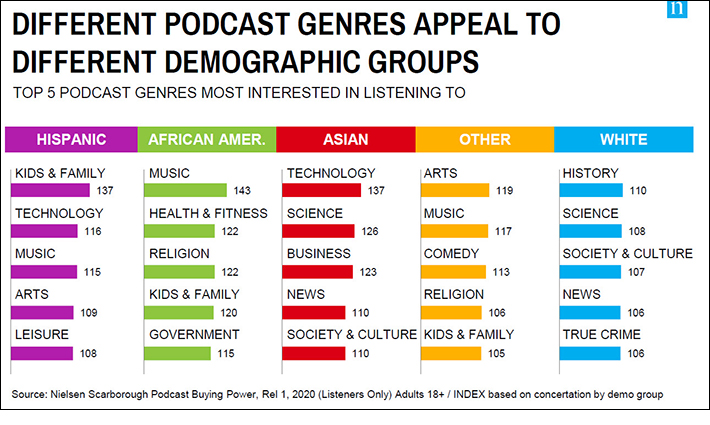 The data is from the Nielsen Podcast Buying Power Service. Launched in July 2019, it relies on information collected from 37,000 Scarborough survey respondents who said they listen to podcasts. Nielsen then uses a recontact survey of those listeners to match up with other consumer data that it collects from those families to better understand the podcast listener.

One of the aims of the service is to help marketers determine how podcasting fits into their media plan. The data reveals that Black and Hispanic podcast listeners were more likely to report visiting a retail location that they heard advertised in a podcast than were Whites. And both Black and Hispanic podcast listeners were more prone to have called a telephone number they heard mentioned in a podcast ad.

Hereau said the findings should be especially helpful for podcasters as they look beyond just direct response advertisers to more traditional brand advertisers like retailers that have a physical location.